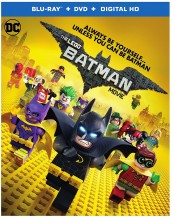 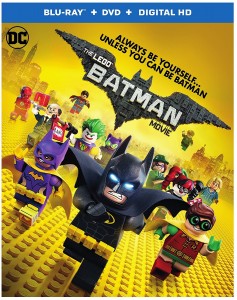 The DC Cinematic Universe has had a hard time getting its footing in the theater (and WONDER WOMAN will only help in this regard) but the animated universe from DC has been killing it for many years. And if you combine animation with LEGOs and Batman, that’s a recipe for success before anything has been filmed. And not surprisingly it is a fun time with numerous jokes and gags that go beyond just children. Of course, there is plenty here for them as well including multiple DC heroic characters and bad guys that are easy for kid’s to remember and remind you of a moment when you get done watching. Loads of stuff on the Combo Pack video title including animated shorts, deleted scenes, six featurettes on the making of the movie, trailers to other films, commentaries and a LEGO Ninjago short. Doesn’t matter what gender, kids like this movie regardless, I have two girls who watched it back-to-back days in a row and my youngest keeps bringing up all the cool scenes she loved. Highly recommended. 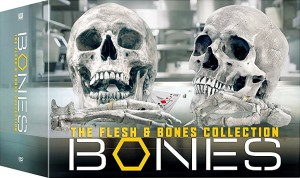 The long running Fox series came to a close this past season after 12 years of being on the air. Now, they have put out the coup de grace of all DVD box sets with the complete series being collected in one massive BONES box aptly named THE FLESH & BONES COLLECTION. Throughout the course of the 12 seasons, we have followed Brennan (Emily Deschanel) and Booth (David Boreanaz) have they seek to solve numerous crazy and hilarious storylines involving murder, cold cases and missing persons. Collected here are all episodes of every season including the final season that recently wrapped up. Now that’s cool, but they have included hours of special features that were included in all the original seasonal releases. One of the final featurettes is a retrospective looking back at the beginning of the show and the more than decade of episodes that came after it and how the show and the stars have changed over the years. If you haven’t picked up any seasonal DVD sets, this is a must have for fans. 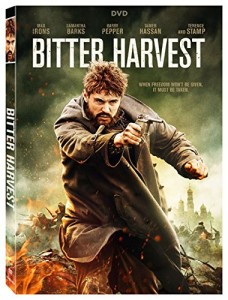 An interesting story about how Russia and the Ukraine have been at odds since before World War II. During the Bolshevik Revolution, Stalin makes a grab for Ukraine’s food, threatening to starve a nation for his own political ambitions. A couple gets caught up in the coming war between Russia and Ukraine as one joins the anti-Bolshevik forces to fight to free Ukraine from Russia’s control. BITTER HARVEST was actually filmed on location in the Ukraine and has some decent acting, some great locations and decent storyline. It isn’t going to win any awards, but it definitely will be entertaining to history buffs and lovers of good drama.

THE VAMPIRE DIARIES: THE COMPLETE EIGHTH AND FINAL SEASON 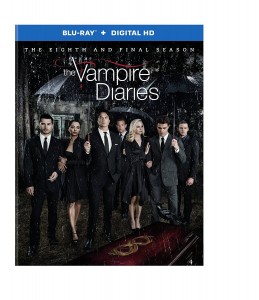 I’m not necessarily a fan of THE VAMPIRE DIARIES but I respect that the show has had a very loyal fan base and from much of what I have read about the show has stayed pretty true to the source material. I can also respect a show that stays on the air for eight years and ends on its own terms, rather than getting cut short with a never-to-be-answered cliffhanger. The final season of The CW show collects the last 16 episodes of the show wrapping up all the loose ends that have been left over the years. Plus, there is an epic showdown between forces with the town of Mystic Falls up for grabs. Who lives? Who dies? Watch and see. There are a handful of featurettes on the final season including a retrospective, which fans might be interested in.

THE BORGIAS: THE COMPLETE SERIES 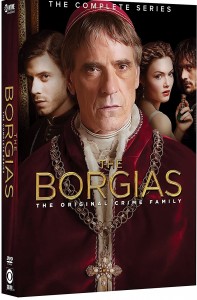 THE BORGIAS THE COMPLETE SERIES | © 2017 Showtime

This was a short-lived series that aired on Showtime that followed Rodrigo Borgia (played by Jeremy Irons) rise to the papal throne in the 15th century in Italy. The story is that Borgia rules with a heavy hands and uses influence over others to gain control and wealth over much of the empire. But he and his clan are challenged by an inspired army commander that seek to bring down the family at any means. All of the 29 episodes from the three seasons of the Showtime series are collected here on nine discs in one cool box set. If you missed out on it because you didn’t have Showtime or didn’t have time to watch and enjoy brutal and seductive period pieces, this will treat you right with good acting, decent cast and loads of debauchery.

Sometimes if you hold out long enough, distributors throw out a super cool collection that collects a good number of movies together for a bargain price. Here we have a nice collection of CBS-based movies from Stephen King. The set includes THE STAND, THE LANGOLIERS and GOLDEN YEARS. Now, this could be on Blu-ray which would be that much better but this is still a cool way to get a whole bunch of movies (13 hours in total) at a decent price. Plus, it is very hard to find these mini-series anywhere on any streaming site.