The filmmaker chats about Showtime's revival of the cult series 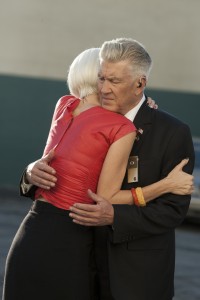 The works of filmmaker David Lynch are often mysterious, so it makes sense that he’s not going to be overly straightforward in discussing Showtime’s TWIN PEAKS. The beloved cult hit series, about a murder in a strange little rural Northwestern town, ran for two seasons on ABC, 1990 and 1991. Lynch and co-creator Mark Frost have now brought forth a twenty-five-years-later return as a limited run for Showtime, with Lynch directing all eighteen episodes. Many of the original cast members, including Kyle MacLachlan, Sheryl Lee, Kimmy Robertson, Russ Tamblyn, Madchen Amick and Joan Chen, are back, joined by some new-to-TWIN PEAKS actors, such as frequent Lynch collaborator Laura Dern and Robert Knepper.

When Showtime holds a Q&A session with Lynch for the Television Critics Association (TCA), he doesn’t give out any spoilers, but here are some highlights of the conversation.

On the origins of TWIN PEAKS:

DAVID LYNCH: In the beginning, many years ago, Mark and I, as if lost in the wilderness, as it always is in the beginning, and then we seemed to find some mountain, and we began to climb, and when we rounded the mountain, we entered a deep forest, and going through the forest for a time, the trees began to thin. And when we came out of the woods, we discovered this small town called Twin Peaks. And we got to know many of the people in Twin Peaks, and the people who visited Twin Peaks, and we discovered a mystery, and within this mystery were many other mysteries. And we discovered a world, and within this world, there were other worlds, and that’s how it started, and that’s what brought us here today. The story continues.

On whether Lynch has thought about the characters and storylines of TWIN PEAKS between the end of the original series and now:

LYNCH: I love this world of TWIN PEAKS. And I often thought about what might be happening. I often just remembered the beautiful world and the beautiful characters. It was Mark who contacted me – it was many years ago now – and asked if I wanted to go back into that world, and we met at Musso & Frank’s [restaurant] and talked, and that’s what got us going again for this one. 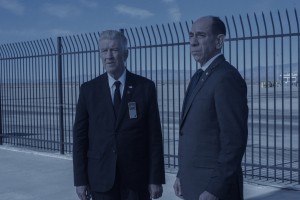 On how Lynch and Mark Frost collaborate:

LYNCH: We work together on Skype. Mark lives in Ojai [California], and I live in Hollywood, and we Skype and write together.

On directing all eighteen hours of the new TWIN PEAKS:

LYNCH: It was just the same as all the others. I see it as a film, and film in parts is what people would experience, and it was a joyful, fantastic trip with this great crew and great cast … It’s pretty amazing how we all fell back in together. And it’s a family. I’m sure you here all hear this – “Oh, we’re like a family going down the road. All these actors are so wonderful. The crew is so great.” But the crew in TWIN PEAKS was even more wonderful than those others. And the cast was even greater and more wonderful.

On what people should expect from the new TWIN PEAKS: 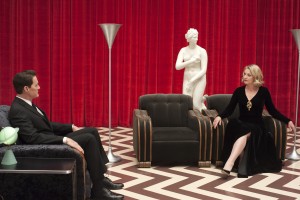 LYNCH: This word “expect” is a magical word. People expect things, and their expectations are met, hopefully, when they see the thing.