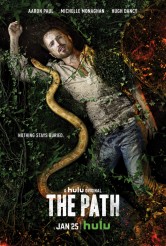 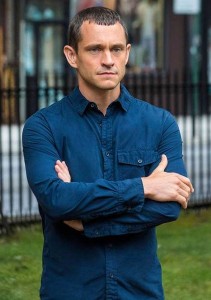 With its first two seasons now available and a third due next year, the Hulu original drama THE PATH examines the dynamics of a spiritual organization, Meyerism, in a state of flux. In the series created by Jessica Goldberg, Eddie (Aaron Paul) has left Meyerism. Eddie’s wife Sarah (Michelle Monaghan) has stayed with the organization and left him for the group’s new leader, longtime adherent Cal Roberts, played by Hugh Dancy. Cal thought he was temporarily in charge while Meyerism’s founder Dr. Stephen Meyer (Keir Dullea) was absent, but events have taken a turn.

England-born Dancy has a wide variety of film, stage and TV credits, but he’s probably best known for his three seasons starring as troubled FBI agent Will Graham in HANNIBAL.

ASSIGNMENT X: Do you see a difference between playing somebody who’s in charge of a bunch of other people, like Cal, and somebody who’s sort of off on his own, like Will?

HUGH DANCY: I mean, inevitably, yeah. I think that Cal is just constantly thinking about the way he’s perceived, because he’s in a public position, and he’s thinking about everything he does in terms of, what’s going to make a good move politically. Also, you have to be driven to want to be a leader. That can be a very positive thing and a very negative thing. I think in fact that comes as close to defining him as anything else. If you’re not in that position, you’re simply not having those thoughts all the time.

AX: So Cal is a character who is very used to the idea that he’s being looked at, and behaves accordingly …

DANCY: Yes. It’s complicated, because he never imagined himself being a leader. All of them [the followers of Meyerism] have received a sucker punch when their leader, who was meant to be around forever and ever, and finish writing the rungs for their enlightenment, has just died. So it’s not like Cal was waiting in the wings to take over. It just so happens that he very quickly realizes that this new position jells rather well with his personality, which is ambitious.

AX: Is there anything comparable to being an actor, and eventually getting some fame, and suddenly realizing that all of these people are watching you even when you’re not acting, to what happens with Cal?

DANCY: Yes, I think that, first of all, it’s a very performative role. What I love about playing Cal, me, Hugh, as an actor, is that one minute, I’m up on stage, doing these very theatrical monologues, and the next minute, it’s all about intimacy and one-on-one intensity. So I get to run the gamut. By the same token, he is a performative character. He is an actor of sorts. But I know what you’re saying, it’s that fact of having fame and people approaching you in a different way because they recognize you could, I suppose, become a bit of an addictive drug. I don’t personally feel that way, but I think if you were built a little bit differently, you might run with it.

AX: How does Cal privately feel about the death of Stephen Meyer? Is he relieved, or upset, or …?

DANCY: I think he has very complicated feelings about it. You’ll learn more in Season 2 about the dynamics of his relationship with Steve, which are far from strictly positive, so he has very conflicted feelings about it. In a way, he’s arriving at a position in Season 2 which is just, “He’s dead, deal with it.” That’s the new reality, and in a way, that shifts the underlying reality of our whole belief system to deal with it.

AX: HANNIBAL creator Bryan Fuller has been talking about the possibility of a Season 4 of HANNIBAL. What are your feelings about that?

DANCY: I love Bryan, I love the storyline that he outlined for me that would have been Season 4. Whether it would be a full season of television or some other format, I don’t know. I think if Mads [Mikkelsen, who played Hannibal] and Bryan and myself could all be available – I can’t fully speak for Mads, but my belief is that it could happen. And frankly, given the story [Fuller] described and given the way we ended Season 3, it could happen in five years’ time. That wouldn’t be problematic in terms of storyline. So I have my fingers crossed. Part of this comes down to a question of rights – who owns the rights to which book. But there are specific elements within SILENCE OF THE LAMBS that could be explored within the relationship between Will and Hannibal very interestingly.

AX: What to you is best about THE PATH as a series?

DANCY: Well, I think the show works at its best when it’s thrilling, but it achieves the thrills almost accidentally. I’m most interested in seeing these characters wrestling with the question of faith. I think Jessica takes that very seriously, and so does the cast.

AX: On a slightly larger question, as an Englishman, how do you feel working in the U.S. with the weirdness going on in this country, or do you feel things are just as weird in Britain, so it doesn’t matter?

DANCY: [laughs] You answered the question for me. Things are pretty weird across the board. No, look, I’m still very glad to be here, working with these people. I feel like what we’re doing keeps me fed and even has tinctures of relevance, so I’m happy to be here.

Article Source: Assignment X
Article: Exclusive Interview with THE PATH actor Hugh Dancy on the new season and a possible Season 4 of HANNIBAL