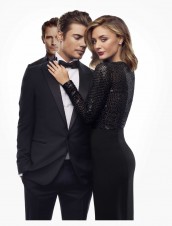 The actor talks about his new drama series 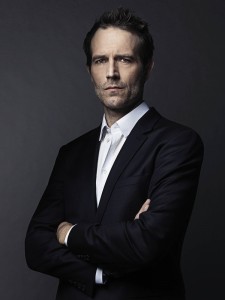 THE ARRANGEMENT is only the second scripted series on the E! network. The drama from creator/executive producer Jonathan Abrahams is now in its first season on Sunday nights and renewed for a second. THE ARRANGEMENT deals with what happens when the Institute of the Higher Mind leader Terence, played by Michael Vartan, decides that his movie star disciple Kyle West (Josh Henderson) should be seen to have a romance. Terence therefore approaches aspiring actress Megan Morrison (Christine Evangelista) with a contract to put her together with Kyle, setting in motion events no one can foresee.

Vartan spent five years on ALIAS as the spy Michael Vaughn. Since then, he’s been a series regular on BIG SHOTS and HAWTHORNE and had an arc on BATES MOTEL, as well as playing an adulterous husband in the thriller ONE HOUR PHOTO and Jane Fonda’s son/Jennifer Lopez’s love interest in the feature MONSTER-IN-LAW.

ASSIGNMENT X: You’ve done a lot of material that’s been life or death. Were you looking for something where nobody was shooting guns or in danger of dying on an operating table, or is this just a good part that came up?

MICHAEL VARTAN: This was a great part that came up. I have done some life and death stuff, not too much. Most of my stuff has been the good guy, the husband, the boyfriend. And this was an opportunity in my career to really play someone completely different, someone who’s flawed and complicated, has a closet full of stuff. And as the season unfolds, a lot of these elements are revealed about his character. So to me, playing someone that was, for lack of a better word, creepy and maybe a little darker was really interesting, because I never had a chance to do that. So that was one of the main things that obviously attracted me to the part. But also, the writing was just wonderful. And when I read the part, I thought, “Oh, this would be fantastic. I’d love to play this guy.” And luckily, Jonathan said yes, so here I am.

AX: What is the tone of THE ARRANGEMENT?

VARTAN: It’s definitely a drama. It’s a one-hour drama and that’s what drew me to the part in the first place, other than I get to play someone who’s different than any character I’ve played. But it’s a complicated show about complicated relationships, and it just happens to take place in Hollywood, which makes it kind of fun.

AX: You say he’s creepy – creepy in what way?

VARTAN: No, I think he’s creepy because he’s manipulative, and he’s someone that I think, when he founded the Institute, really had just pure intentions at heart. Over time, with the influx of money and fame, he sort of lost his way and forgot what he stood for, and really I think he’s just creepy because he’s gotten to a point in his life where he will pretty much do almost anything to get what he wants, including throwing dear friends under the bus, per se, so that’s an interesting side of his personality.

VARTAN: Well, no, actually. That question has been brought up many times, but like Jonathan said, our show has nothing to do with religion. It’s really about a self-help organization that became quite famous because Terence’s protégé Kyle just happens to be a movie star. I know some of the parallels might seem obvious to some people, but it’s really not about that at all. It couldn’t actually be more different than T. John Rubbard.

I want to say one thing, because we’re talking about the backdrop [of Hollywood and big self-help organizations] and surely there are parallels that are inevitably going to be drawn. But this show to me is really about these characters and their relationships. Any show I’ve ever watched that I ever liked is really about the characters. SEINFELD was about absolutely nothing, but you love those characters and the way they interacted. And the thing I love about the show, and obviously I’m promoting it, but I really feel this and I saw it when I read the pilot, is that these relationships between the characters go far beyond the Hollywood backdrop. They’re complicated and they’re twisted and they’re beautiful and they’re flawed and there’s redemption and there’s failure and there are those wonderful things that make us wonderful human beings. And to me, that’s why this show will end up being, hopefully, successful. Because of top of it, it has the backdrop and all these weird, possible innuendos that everyone loves these days. So that’s my five cents.

AX: Did you do any research into any of the big self-help organizations that are either still around today, or were popular in the past, like EST?

VARTAN: No, I didn’t, actually. Fortunately, and I know that sounds that I’m saying this because I have to, but I wouldn’t have taken the part if I didn’t love the writing. Sometimes as an actor, you come across a script where the writing does so much of the homework for you. And my character wasn’t based on anybody – I sort of had free rein to infuse it with my sensibilities and try and make it as real as possible, but stay out of the way of the writing, just honor the writing and let the writing tell the story as much as possible.

AX: Is the relationship between Terence and his romantic/business partner Deann, played by Lexa Doig, also an arranged contract?

VARTAN: I don’t think it is. I think Terence and Deann have known each other for many, many years. Lexa and I used to joke on the set that they love each other as much as they can in the midst of this very complicated business relationship they have.

VARTAN: Well, yeah, I guess just in terms of the acting itself. As a leader, you have to find the confidence within you to convince the audience that you are a leader of people, whereas if you’re playing a follower, you want to present yourself in maybe a little more vulnerable and meek way. But it’s acting. You change your thought process and your intentions and so far, it’s worked, I think.

AX: Do you discuss the scripts at all with Jonathan Abrahams and say, “Perhaps I could say this instead of that?”

VARTAN: Yes, sometimes. But I have to be honest – it’s been actually quite rare, because the writing has been so good. There are definitely times when I’ve had a big monologue and there were a couple of sentences that maybe I had a hard time with, and I’d just approach him and say, “Could I possibly say it this way?” He always says, “Absolutely. If it makes you feel more comfortable, it’ll sound more natural, so just do whatever you want.” He’s not precious about his words – he’s very collaborative in that way.

AX: Do you have any concerns about THE ARRANGEMENT being on E!, because the network usually runs reality programming, that people might tune in and think it’s real?

VARTAN: Not really, because if they actually watch the show, they’ll quickly realize that it’s [a drama]. I’m actually quite excited about being on E!, because as you know, platform these days doesn’t matter. If it’s good, it’s good, and this is their true first one-hour drama, and they’re putting a lot of energy and resources behind it, and I kind of feel like we’re on the ground floor of them maybe changing their brand and helping be part of that is very exciting.

VARTAN: I do. I have a movie called SMALL TOWN CRIME [which premiered at SXSW earlier this year] with John Hawkes and a bunch of other wonderful actors.

AX: And what would you most like people to know about THE ARRANGEMENT?

VARTAN: Oh, that’s a good one. I think people will be incredibly surprised at how good the relationships and the writing is, because I think people have an idea of what E! is, and I think they’ll be really surprised if they tune to E! and see the show and really feel that E! is going in a clearly different direction.