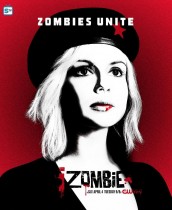 The executive producer talks the new season of the CW series 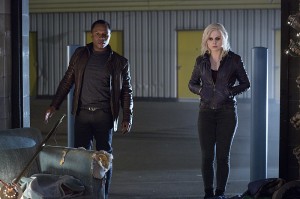 Now in its third season on Tuesday nights on The CW, iZOMBIE is loosely based on a series of DC Comics created by writer Chris Roberson and artist Michael Allred. In the TV version, developed by Diane Ruggiero- Wright & Rob Thomas, Liv Moore (Rose McIver) has to give up a promising medical career when she’s scratched by a zombie and becomes one of the undead. Liv still has her personality, morality and even libido intact – so long as she ingests human brains on a regular basis. She gets a job as a morgue attendant, assisting pathologist Dr. Ravi Chakrabarti (Rahul Kohli), who is fascinated by Liv’s condition and wants to help her. Liv discovers that she can access the personality and memories of the brains she has eaten, which is a huge help in solving murder cases. Seattle police homicide detective Clive Babineaux (Malcolm Goodwin) often consults with Liv; he thought she was psychic, but learned the truth at the end of last season.

iZOMBIE series co-creator/executive producer Ruggiero-Wright previously worked with collaborator Thomas on VERONICA MARS and the revival of CUPID. Her other writing/producing credits include BATES MOTEL and THAT’S LIFE.

DIANE RUGGIERO-WRIGHT: No, the comics have finished. 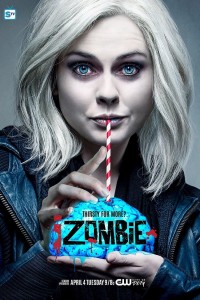 AX: How far did the comics go in terms of the narrative that you’re doing on the show?

RUGGIERO-WRIGHT: It’s very different. It’s not the same at all. We basically were inspired by the comic. The similarity in the comic is that it was a young, attractive zombie who eats the brains of dead people and gets visions of their memories, and that’s pretty much all we used. She was a grave digger, they didn’t have any procedural, there was none of the other characters [that are in the TV series], so it was very different. It’s great, it’s just very different.

AX: As you went along, did you play into more and more the zombies getting the personalities of the people whose brains they ate?

RUGGIERO-WRIGHT: It’s so funny. We were breaking the pilot, we had that aspect, but we weren’t sure when we got to series how much of it we were going to do, and if you watch the show, the second episode of the first season, we were still kind of getting our sea legs, and then by the third episode, we were full-on having her takeover of the brain. I’m kind of the brain whore – I always want to go full-on brain, and Rob scales me back a little, because I just think it’s fun.

AX: Blaine, the sometimes villainous, sometimes helpful character played by David Anders, does not seem to have as much of a personality change when he eats brains. Is that because he’s got better self-control, or …?

RUGGIERO-WRIGHT: I think we always try to deal with that – we’re seeing him between [feedings] a lot of times. I think that’s something that we’re doing, we’re having some creative freedom with that, where sometimes we have it and sometimes we don’t show too much. He’s also been off the brains – he’s not been a zombie for a while, but we do have him on brains this season, and we have other – Major [Liv’s boyfriend, now a zombie, played by Robert Buckley] is on brains, so we do have other people on brains, which I think is fun.

AX: Did you ever see DOLLHOUSE, the Joss Whedon show? It had characters whose personalities were completely changed by brain implants. The recent episode where Major got a teenage girl’s personality reminded me of a DOLLHOUSE episode where Enver Gjokaj’s character mistakenly got a club girl persona …

RUGGIERO-WRIGHT: Oh, that makes me feel good. I did not see that episode, but any similarity between a thought that I have in my head and Joss is the best news [laughs].

AX: Because it now something that has now been discussed in the dialogue by other zombies, who dye their hair and use artificial tans to keep from looking pale and undead, how long can you justify Liv not dyeing and tanning to make herself look alive?

RUGGIERO-WRIGHT: Here’s what I can say, is that that’s going to be addressed in this season, but I can’t really tell you about it. But it comes up.

AX: Ravi behaves pretty badly towards his sometimes girlfriend Peyton, who’s played by Aly Michalka. He’s obsessed with the fact that she slept with Blaine, even after she articulates to Ravi, “Look, I was kidnapped and tortured and held in a box.”

RUGGIERO-WRIGHT: She’s so right. I was so mad at him. I think it was just, he has such a ringside seat to how bad Blaine is that she is not exposed to [Peyton didn’t know what Blaine had done], so he is just so preoccupied – it’s basically like she just did it with the Devil, you know what I mean? And so he’s so preoccupied, as you would be – if you found out that your loved one slept with Hitler, you’d be like, “I can’t get over the fact that you slept with Hitler.” [laughs]

RUGGIERO-WRIGHT: But even though you didn’t know they were Hitler, I still would have a hard time – I feel bad for [Ravi and Peyton]. I feel bad I got them there [laughs].

AX: Is Blaine going to continue to ping-pong between being good and bad throughout the show, or is he having a temporary bout of goodness that will vanish?

RUGGIERO-WRIGHT: I don’t think you can [be specific about it], but there are definitely changes in Blaine.

AX: How did you wind up with Robert Knepper as Blaine’s ultra-evil dad?

RUGGIERO-WRIGHT: That is good fortune, because it’s so perfect. Actually, one of our producers, Danielle Stokdyk, knows him personally, knows him socially, and she had that idea.

AX: What would you most like people to know about iZOMBIE Season 3?

RUGGIERO-WRIGHT: That it’s super-fast-paced, and things go off in an amazingly fast and interesting direction.

This interview was conducted during The CW’s portion of the Television Critics Association (TCA) winter 2017 press tour at Pasadena, California’s Langham-Huntington Hotel.