The actress talks the Amazon series - and when she was a real-life p.i. 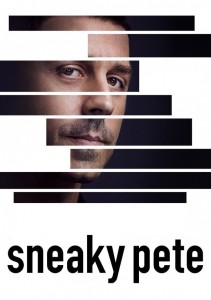 As opposed to Audrey, Martindale seems to have her own life well in hand. The Texas-born actress has won three Emmys, one for playing Kentucky hill country marijuana mogul Mags Bennett in JUSTIFIED, and two for her recurring turn as KGB spy handler Claudia on THE AMERICANS. She also voices a character called “Character Actress Margo Martindale” on BOJACK HORSEMAN.

SNEAKY PETE’s show runner Graham Yost (he took over the position when Shore left the series) created JUSTIFIED and is an executive producer on THE AMERICANS. However, Martindale says the fact that they’ve both wound up on SNEAKY PETE was not a result of one recommending the other.

ASSIGNMENT X: You’ve played some relatively soft people, like your divorced mom on THE MILLERS, and then there are iron-spined characters like JUSTIFIED’s Mags Bennett and Claudia on THE AMERICANS. On that scale of softness to hardness, where would you put Audrey?

MARTINDALE: I think when you see the second episode, what I do with the [character played by] Debra Monk, and where I go with that, I think that’s a little window into how soft Audrey is [laughs].

AX: So, not very. Do you think Audrey is going to start to notice there are things about “Pete” that may indicate he’s an impostor?

MARTINDALE: Well, I do think that. I will see what [the producers] think. I know that people can wish things to be, and [Audrey] did lose [Pete’s mother, her] daughter in this as well. And also, I do need him. I do need help, because my husband had a stroke. So here’s the deal. What I think and what is and what will be could be different from what I’m thinking now. I think I was more suspicious than maybe it plays out for awhile. Or maybe it’s because I’m manipulating him. I’m not sure, because I’m not writing it. But it’s very interesting and it’s what makes it fun, is to see what layer is going to be pulled back next.

AX: Do you ask the writers what Audrey is thinking?

MARTINDALE: I have asked Graham to give me as much of the facts of my character that he can give me on paper. I said, “I need to know as much of the facts that I can play from.” Because what I created in my head, I told him what it was. He said, “Whoa! No, you can’t do that, you can’t do that, because then we have to go back to the writers’ table.” So what I created was something a little more convoluted, which was really fun [laughs]. I’m sorry he didn’t pick up on it. So I don’t know – he gave me the facts that he knows. And then we’ll add to that, and then we’ll go deeper, and then something else will be revealed.

AX: Did you do any research into the bail bonds industry?

MARTINDALE: I did. I looked at lots of pictures of women in bail bonds. I went to Torrington, Connecticut, which is a very kind of blue-collar-y town. I have a house in Litchfield County, but you go to Torrington, because that’s where the Target is. But it’s got a lot of pawn shops and bail bonds shops. It’s depressed, but it’s also Rust Belt-ish kind of feel.

AX: When Audrey was younger, do you think she was she literally tackling bail jumpers, or was she using her mind, or did she pull guns, or trip them?

AX: What do you think Audrey’s attitude is toward her husband? Is she genuinely still in love at this point, or is this just sort of the direction everything is going?

AX: How many situations will happen before Audrey starts to look over her shoulder and get suspicious of Pete regarding her safe?

MARTINDALE: I think I’m suspicious of anyone with that safe, including my husband.

AX: Is her concern with most of her family malice or stupidity?

AX: Have you had any scenes so far with Bryan Cranston?

MARTINDALE: No. [But] he directed me [in SNEAKY PETE] , and he’s fabulous as a director.

AX: You and Bryan Cranston have both played several iconic roles each. Are the writers conscious of steering into or away from that?

MARTINDALE: I think away from, in that I remember FX talking to me about FARGO awhile back, that there was a part that they really were interested in me for, but then they decided it was too close to Mags Bennett. They talked themselves out of it very quickly, is what they did. [laughs] So I think that these guys, I think that they looked for the juice, to give me some juicy stuff.

AX: How are you scheduling SNEAKY PETE with THE AMERICANS?

MARTINDALE: Well, they don’t shoot at all at the same time. I finished SNEAKY PETE, and two weeks later, started THE AMERICANS.

AX: In BOJACK HORSEMAN, how much does the animated “Character Actress Margo Martindale” actually look like you?

MARTINDALE: Somebody stopped me on the street, a group of kids, and said, “Are you Margo Martindale from BOJACK HORSEMAN?” I said, “Really? I’m a cartoon?” I’m a little smaller – I’m not quite as chubby, which I really appreciate [laughs].

AX: SNEAKY PETE is based in part on some of Bryan Cranston’s early life. Are any of your life experiences worked into the show?

MARTINDALE: I think that there is an element of me in this. [Show runner Yost observed], “From the outside, she seems like you.” He said, “I think maybe it’s you that got in over your head and just go from there.” And he’s a little right, but that’s not interesting enough for me, so I have to kind of jazz that up a bit.

AX: As an actor, you go from job to job. Can you relate to that aspect of Audrey’s business?

MARTINDALE: Oh, my goodness, yes. Absolutely. And we were never anything but happy – I’ve been married for thirty-one years, but I’m talking about even before that. It was always hand to mouth before, but my husband works, so we made everything work, but even before I got married. And yeah, there were some kind of crazy things I did before I was married to get some money to buy some clothes. I don’t mean stealing or anything illegal, that I knew of.

AX: What sort of jobs would you take?

MARTINDALE: I was a private investigator while I was doing a hit play off-Broadway. I was a private investigator during the day. I worked as a spa consultant during the day, and did the beginning of STEEL MAGNOLIAS, before we moved it to a bigger theatre. So I had a job always during the day, doing a play at night. I worked as an on-the-floor authority for a Weight Watchers restaurant, because I’d lost so much weight at Weight Watchers, so I’d fly around to everybody’s table and give them what the exchanges were – this was back in the exchange days – I had a million jobs to make me be able to act, to do a play.

AX: Did the acting come in handy with the private investigating?

MARTINDALE: Everybody there was an actor. Wayne Knight was one of my cohorts. Wayne and I also had a club act together [laughs].

AX: Did you learn anything doing private investigation that was useful as an actor?

MARTINDALE: Wayne and the boys got to go out on the street and bust up counterfeit rings and stuff, do surveillance in a car. I didn’t get to do that. All of mine was done sweet-talking people on the phone, getting dirt on people, getting dirt on husbands from neighbors, getting dirt on anybody who was applying for a job for headhunters. It was a deceptive job. Very Audrey [laughs].

MARTINDALE: Brooklyn, and all over Manhattan, all over New York, and upstate and in Warwick. The farm is in Warwick, New York. It’s all around.

AX: How long was it between making the SNEAKY PETE pilot and making the series?

MARTINDALE: A year and [two months].

MARTINDALE: It was odd. It was hard. And it was doing the same show, but you had to remember everything. I had to remember even who we were, basically, because it was a long time [between making the pilot and the series]. But it was fun.

AX: When you did the pilot, and were hoping it would go to series, when the scripts finally started coming in, was it fulfilling?

MARTINDALE: No, I don’t think it was unexpected. I have such great trust in those writers, in Graham Yost and the whole group, so I knew also how they tell a story, I know they lay it out and I know they layer it and layer it, so I’m interested in the way they tell the story. So even if there were some things that I didn’t have a lot to do with, I knew that it didn’t matter, because I knew it would come back around.

AX: What would you most like people to know about SNEAKY PETE?

MARTINDALE: That everyone has a secret.