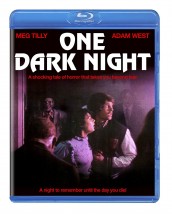 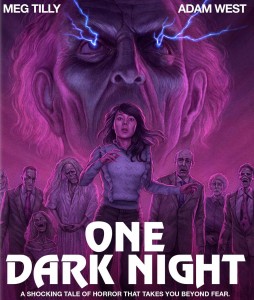 It’s strange that we continue to find solace in low-budget horror films from the 1980s – particularly the early part of that decade. Horror at that time not only saw a rise in the slasher genre, but also every other kind of subgenre (creature, supernatural, splatter). And now even second and third-tier movies released during that time has allowed for Blu-ray Collector’s editions of movies that may have been relegated to the budget bins in the VHS era.

ONE DARK NIGHT from 1982 is not one of the best horror movies of the decade, but it certainly isn’t one of the worst as it’s nice to see Code Red putting this out in this special edition Blu-ray.

Perhaps the film’s only downfall is it’s tame by most standards (and certainly by 1980s standards too nabbing a PG rating). Despite this shortcoming, director and co-writer Tom McLoughlin (who went on to direct the excellent FRIDAY THE 13th sequel JASON LIVES) still crafted a spooky, old-fashioned horror tale set in a Mausoleum and the film is solidly entertaining.

Like many older movies remastered in HD, ONE DARK NIGHT offers a completely different experience then the one on old faded full frame VHS copies. Here we get a 1:78:1 anamorphic widescreen presentation and the movie looks incredible – particularly the scenes set in the mausoleum (which at times evokes the atmosphere of the 1979 classic PHANTASM).

The story focuses on the death of renowned psychic named Raymar who was some sort of energy vampire and had been experimenting on sucking the life out of unsuspecting victims before his mysterious demise. Naturally, he’s buried in a mausoleum, but nothing this evil stays buried.

Meanwhile, a high school girl Julie (Meg Tilly) is forced into an initiation hazing by a nasty school clique called the Sisters (Robin Evans, Leslie Speights, Elizabeth Daily aka E.G. Daily). That initiation requires her to be locked into the same mausoleum overnight. Of course, the Sisters have planned some of their own scare tactics to enhance the night for Julie, but they backfire when Raymar’s corpse reawakens. Searching for Julie is her boyfriend Steve (David Mason Daniels) who knows something bad is happening, and doesn’t know where she actually is.

Original Batman Adam West plays the husband of Olivia McKenna (Melissa Newman). She’s Raymar’s estranged daughter, and also seems to have some psychic ability herself. West is fine, but he’s obviously here for marquee value to sell the movie at the time of release, rather than having anything significant or heroic to do. 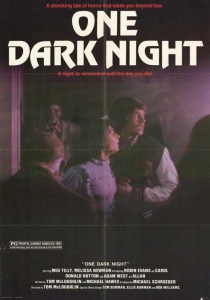 Stylistically, ONE DARK NIGHT works on many levels. The suspense and build-up is quite strong, as is the mystery of what exactly is going to happen next (something many horror movies fail to do). The character work is also strong, and aside from a few awkward lines that play serious but are actually unintentionally funny (which is true for many 1980s horror films), you actually like most of the characters in the film.

Where the movie comes up short is the lack of pay-off which feels like the film ran out of money for the finale. Since the film was funded as a tax write-off for Mormon investors, the film also lacks any bad language, nudity and gore. Tom Burman does provide some clever corpse effects (and there is some gooey-ness to that), but the film never takes the events to the next, terrifying level. Again, that’s a nice change of pace, from the blood-letting 1980s horror is known for, so looking back on it nearly 35 years later, it’s actually a plus, not a minus for this film.

The HD transfer is quite good, though there are a few moments of color shifting and black spots that probably should have been cleaned up for this presentation, but it’s not that distracting considering the rest of the film looks so damn good.

The special feature Code Red has compiled are quite strong. There’s archival commentary with McLoughlin and writer Michael Hawes and brand new commentary from McLoughlin and producer Michael Schroeder. There’s new interviews with McLoughlin, Schroeder, actress E.G. Daily, make-up artist Paul Clemens, DP Hal Trussell, actress Nancy McLoughlin and production designer Craig Stearns. McLoughlin’s interview is interesting, because he shows the exact location where he plans to be buried – which happens to be the same mausoleum at Hollywood Forever Cemetery where some of this film was shot.

Probably the most interesting special feature is the Work Print Version of the film which was called NIGHT IN THE CRYPT. The print is not high quality, but it shows a slightly alternate version of the film. It’s missing the creepy opening of the finished version of the film and it’s clear some reshoots took place after the fact, because the ending was clearly rejiggered and enhanced in the final version.

ONE DARK NIGHT is a fun, 1980s throwback with Code Red once again doing a great job of spotlighting this underrated gem.