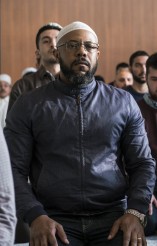 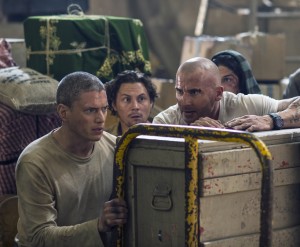 A scene from an upcoming episode of PRISON BREAK | © 2017 Fox

PRISON BREAK is back on Fox on Tuesday nights for a nine-episode arc. The series, about devoted brothers Michael Scofield (Wentworth Miller) and Lincoln Burrows (Dominic Purcell) ended after four seasons in 2009 with Michael’s apparent death. In the revival, Lincoln learns that Michael is alive in a Yemen prison and recruits many of their old friends and frenemies to help break him out.

Rockmond Dunbar reprises his role as Benjamin Miles “C-Note” Franklin, who is now an imam, a Muslim minister. Dunbar was in half of the original PRISON BREAK series. The Berkeley native has also had regular and recurring roles in THE PATH, THE MENTALIST, THE GAME, TERRIERS, SOUL FOOD and EARTH 2, as well as appearing in feature films including KISS KISS BANG BANG and HIGHLAND PARK. Dunbar is also a writer/producer/director who made the feature film PASTOR BROWN and the documentary THE GREAT COMMISSION.

Dunbar explains that he has been all over the world promoting PRISON BREAK during and after its original run.

ROCKMOND DUNBAR: I’ve been invited to West Africa, to Gambia, by the last president, Yahya Jammeh. I was invited because he was a fan of PRISON BREAK. “What do you mean? He wants to sit down and talk to me about what? Because he’s a fan of PRISON BREAK? That’s weird.” So I flew out to West Africa for the first time in my entire life, I sat down with him, and he’s like, “I love PRISON BREAK.” This is Gambia, I’ve never been, so we end up becoming friends, and at the end of the day, what he really wanted to do was bring more celebrities of African-American descent who just really hadn’t been to Africa, and he wanted to expose them to the beauties of Africa. So I was the guy who, as many celebrities as we could bring, to just allow people to see Africa who hadn’t been This was, oh, wow, for the last seven years. He was just voted out of his presidency this year.

ASSIGNMENT X: Is he the president who refused to leave after he was voted out?

AX: During the six years between the end of the original series and this revival, did you ever think, “I wonder what C-Note would be doing now?” And if so, did you think he’d become an imam?

DUNBAR: No. I’ve just been working as hard as I could to keep income coming into the house for my kids and my wife [actress Maya Dunbar]. That was my main focus. But as soon as I got the invitation to come back, then it started to kick in, like, “Well, wait a minute. What is he going to do? What’s his story? I know I went into protective custody – what about my daughter? What about wife? Oh, my God, what are they going to do?” And to see the story that they came up with was really inspiring. I’m so happy that they pulled together such a great story arc.

AX: C-Note seems a little reluctant to get involved at first …

DUNBAR: Yeah. Because he has his life. It’s like he said. He’s made some choices, and they’re choices that are solid and concrete. So he’s a little leery of going back into the past.

AX: Did you talk to any imams to prepare for that aspect of C-Note’s new life?

DUNBAR: Oh, absolutely. There’s no way [without research] that we can go into such a lifestyle that I wasn’t familiar with before and have it portrayed accurately, and that’s what we do as actors, we go in and we dive into the lifestyle, we dive into as much as we possibly can to make sure it’s accurate.

AX: Is playing an imam any different from playing a Christian minister?

DUNBAR: No, there isn’t any difference. The only difference that you can possibly even think of is, “What’s respectful and what’s not respectful?” Those are the things that you really just want to adhere to, and make sure people look at it and say, “Yep, I believe you one hundred and fifty percent.” And if they believe you, if they fall into what you’re saying and what you’re doing, then you’re doing a good job. It’s the same thing, just recently on LABYRINTH, I had to speak in a Jamaican dialect. And a little bit of patois, a little bit of just the rhythm of the talk, and I realized, “I have to sit down with a dialect coach, call some of my friends who are Jamaican.” I didn’t want to speak in that dialect and have them look at me like, “Man, you suck.” [laughs]

AX: You didn’t want to sound like Jar Jar Binks …

DUNBAR: [laughs] Exactly. So you just do your homework, and you make sure that you do it accurately and respectfully.

AX: You’re now working on a project about the neighborhood where you grew up …

DUNBAR: I’m super-excited. I was born and raised in Oakland. My Uncle Andy used to have a second-hand store on East Fourteenth that was right down the street from the East Bay Dragons clubhouse. So when he would tell me, “Hey, sonny, go ahead and get me a fish sandwich,” I would have to walk past either the Hell’s Angels clubhouse, which was on one side, or the East Bay Dragons, which was right across the street. And my dad always told me, “Be careful, don’t go down there.” So there was a fear that was instilled in me from the very beginning.

But I skate across, I noticed that the East Bay Dragons, they weren’t there, but the Hell’s Angels, they were all parked, so I crossed the street and went around to the fish fry, and I walk in, and there’s a guy who’s like seven feet tall, and I see his patch on the back, East Bay Dragons, and I didn’t know, should I leave, or should I just continue to get lunch for my uncle? And he turns around and he looks at me, and he’s like, “Young man, what are you coming in here for? Some links, chicken, barbeque? What are you coming in for?” I was just like, “Yeah, yeah, fish sandwich.” And he orders all of this food for me and pays for it, hands it to me, and at that moment, I realized, “Wait a minute. These guys are taking care of the neighborhood. The people that are instilling this fear [are wrong].” Being an older man, I wanted to come back to my neighborhood and tell their story of how much they helped the neighborhood and wanted to make sure that everyone was safe in their neighborhood, and now I will be able to tell that story. I’m just so happy.

AX: And what would you most like people to know about this new iteration of PRISON BREAK?

DUNBAR: If you love Season 1 and Season 2, which I think were the best seasons, this is its equal. Those two seasons for me were like sky-high. It’s back full-force and [creator/executive producer] Paul Scheuring has really done an incredible job by pulling this together.