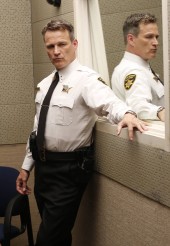 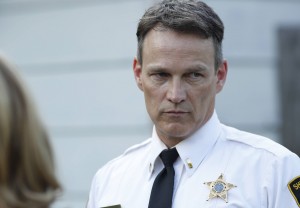 In Fox Network’s Wednesday night drama SHOTS FIRED, Stephen Moyer plays Lieutenant Breeland. Breeland is the top cop in a small North Carolina town where the Deputy Joshua Beck (Tristan Mack Wilds), the department’s only black officer, has just shot a white teenager, several weeks after a black teenager has been killed. A special prosecutor (Stephan James) and his tough investigator (Sanaa Lathan) are brought in and quickly come into conflict with Breeland.

Moyer, who speaks with his normal English accent when he’s not playing Americans, spent six years as Louisiana vampire Bill Compton on HBO’s TRUE BLOOD. He was also Captain Von Trapp in NBC’s THE SOUND OF MUSIC LIVE, costarred in the FX series THE BASTARD EXECUTIONER and produced and directed the upcoming film THE PARTING GLASS, from a screenplay by Denis O’Hare.

Moyer first discusses aspects of SHOTS FIRED on a Q&A panel, then follows up with some one on one discussion of the series.

Asked about working in North Carolina and researching his role, Moyer relates, “A couple of us got there probably seven to ten days early, and that’s rare. Sometimes you go in for a couple of days before you do your costume fittings or whatever, and you’ve done your research before you arrive. But Mack [Wilds] and I and Beau [Knapp, who plays Deputy Caleb Brooks], were able to meet Ken Schul, who’s the captain of the Charlotte Police. And there were so many little things that he gave us, like when you turn up at an incident, you always put your fingerprints on the back of a car. That’s just a tiny one that just came to my mind, how you get out of the car. And then I did some ride-alongs with Ken, and that was fascinating.

“What was amazing was, driving through somewhere like Charlotte and then going to the outskirts and being with Captain Ken, who’s been twenty-nine years on the force, I was really fascinated that across the sort of cultural, racial divide, he was deeply respected from all sides, everywhere we went. There was one area that we went into which is Hidden Hills, which famously had a big gang, drug problem where he was expressing concern going in there. Not because he doesn’t do it every day, but because he was explaining to me that a lot of those kids from there that were a part of that drug takedown are all in prison, so there’s a tension from families and family members which you can feel when you go into those areas. And that was all fascinating, because it literally changes from district to district and city into rural and suburban.

“You’ve got to remember that we were shooting at a time when right in the middle of our shoot was Brexit, the [U.S. presidential] primaries, Alton Sterling, Philando Castile. It was all happening while we were doing this, and we already felt like it was resonant, what we were doing. But even more so, it piqued our interests, and everything that was happening around us at the time as well. And we would come in every day and talk about what was going on in the world before walking on set. So it was a fascinating time to be examining this subject.”

Moyer notes that he had his own encounter with local police while working on SHOTS FIRED. “After Philando Castile was killed, which was Wednesday night, on the Thursday, I had an incident where I got pulled over by the police. And it was a really terrifying time, because I was in the middle of a dark area. I didn’t know that I was allowed to drive to a lit area before I pulled over. It’s just something that I wouldn’t have known. And it was a really difficult little interaction I’d had. And I called Ken when I got home and I said, ‘Man, I was in this really weird situation where I was feeling uncomfortable before I got in the car and then I got pulled over by the police.’ And these two sections of society that I’ve never felt a threat from before, I felt a threat from. And he said, ‘I’m sitting here arranging a peaceful protest tomorrow in Charlotte, where I’m having to get two hundred police together to do a peaceful protest for people who are protesting against me and my team.’ And it really just put the shoe on the other foot for a second. And of course, that was the day, that protest for him in Charlotte, was the day that all the police were killed in Dallas. And it just was really good for me to hear the other side, even though I was playing a police officer. This is a really complicated issue. It’s huge. “

SHOTS FIRED creators/executive producers Gina Prince-Bythewood and Reggie Rock Bythewood prepared dossiers on each of the characters for the cast, which Moyer says he greatly appreciates. “What I love about what these guys have done is that they don’t give you what they think. They give you a version of the story and you get to make the decision. And I think as well that it’s worth saying that one of the things that attracted us all to it with regard especially to playing police officers is that all of these characters, every single one of them, is gray. There’s no hero in this piece, and I was very much attracted to that from the beginning. When we arrived, we were given these beautiful folders that talked about our characters’ arcs, what characters like this would have experienced, where they would have gone to school, that kind of thing, that level of detail coming from [Prince-Bythewood and Bythewood] to you.”

ASSIGNMENT X: Had you actually worked in the American South before this? TRUE BLOOD did some location shoots …

STEPHEN MOYER: Yeah, we did some TRUE BLOOD down in Louisiana, and I shot in Atlanta. Yes, I’ve shot down there a few times.

AX: So by now, do you have your regional accent down?

MOYER: Well, this was slightly different. Instead of [does accent] Louisiana, this was a very specific North Carolina sound, and so I spent a lot of time with some people down there, doing some accent stuff and wanted to make it different from Bill and TRUE BLOOD, and really enjoyed sort of finding those hidden idiosyncrasies.

AX: You’ve said every character in SHOTS FIRED is gray, but Breeland seems to be perhaps a darker gray. How do you get into the mindset of somebody on a real-world issue where he’s arguably not on the same side you are?

AX: How is it playing somebody who’s in charge of a bunch of other people?

MOYER: It’s fantastic [laughs]. Yeah. He’s got a certain power, and that power allows him to shape people in his own way, and he ends up trying to shape people how he’s been shaped by his mentors, which I think is a really interesting idea. We are a product of the people around us, and I think he enjoys that celebrity.

AX: I know race relations in England are not fabulous, but because the police are not generally armed, you do not have the same issues there around police shootings. In your opinion, is there anything in England comparable to the situation being dramatized in SHOTS FIRED?

MOYER: Yeah. We have these moments of inner-city pressure, where they suddenly bubble over, and then we’ll have crazy forty-eight hours where everything gets wrecked, but as you said, it doesn’t usually end up with people getting shot. And as an outsider to America, I’ve been here a long time, but you just don’t understand why everybody needs to have weapons.

AX: What would you most like people to know about SHOTS FIRED?

This interview was conducted during Fox Network’s portion of the Television Critics Association (TCA) Winter 2017 press tour at the Pasadena, California Langham-Huntington Hotel.