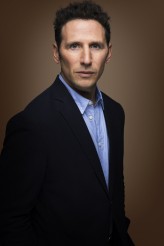 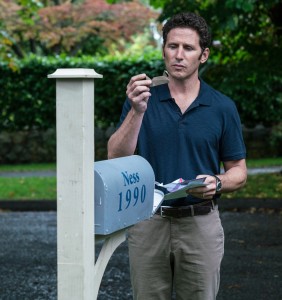 PRISON BREAK is a show where, almost invariably, if a character seems too good to be true, they turn out to be very bad indeed. That’s been the case with Mark Feuerstein’s character Jacob Anton Ness. In PRISON BREAK’s fifth season, Tuesdays on Fox Network, in both real time and series time, it’s six years after PRISON BREAK’s original four-year run. Michael Scofield (Wentworth Miller) is believed to be dead and his widow, Dr. Sara Tancredi (Sarah Wayne Callies), is now married to Feuerstein’s Jacob and raising Michael’s young son Mike (Christian Michael Cooper) with him. Then it turns out that Michael faked his own death and is now trapped in a Yemeni prison, whereupon all hell breaks loose.

Feuerstein (pronounced Foy-er-steen), a New York native, wrapped his eight-year run as Dr. Hank Lawson in ROYAL PAINS a year ago. He can also currently be seen on Netflix in WET HOT AMERICAN SUMMER: 10 YEARS LATER. Feuerstein has also had arcs on other series, including ONCE AND AGAIN and THE WEST WING, and worked in features that include WHAT WOMEN WANT and DEFIANCE.

ROYAL PAINS has made a lasting impression on a lot of people. One of these is Richard Dreyfuss, who comes over to Feuerstein during a party thrown by Fox Network for the Television Critics Association (TCA) to say how much he loved both the series and Feuerstein’s work on it. It turns out the two actors worked together on a script reading years earlier, and both express a desire to work together again. When Dreyfuss – who’s in attendance to talk about his work in Fox’s SHOTS FIRED – heads out, Feuerstein talks about working in PRISON BREAK.

ASSIGNMENT X: For one thing, Jacob’s young stepson Mike keeps talking about Michael Scofield as his “real father.” Does Jacob feel like smacking the kid for not accepting him as his father?

MARK FEUERSTEIN: Yes, I do. It’s like, enough. I’m your dad now. Accept it. I love your mother, your real dad is dead, and just get on with life, with me.

AX: How long have they been married?

FEUERSTEIN: My character and Sara? About I think three, four years.

AX: Okay, so Mike’s seven? You’ve been raising him since he was three or four? Shouldn’t he think of you as “Dad”?

FEUERSTEIN: He certainly should. But for some reason, he’s got this deep attachment to his biological father. And I’m a very good dad to him. I mean, I’ve been very warm and loving. And then it all goes to s*** when we find out [Scofield] really alive. I’m only there because I pose a good foil for Michael Scofield, a good antagonistic counterpoint to his getting back into [Sara’s] good graces, he’s been gone for eight years, and if he’s been around and been alive, how the f*** has he not come home to take care of their child with her? So she’s got her own ax to grind. And you’ll have to watch to see how we go about getting her.

AX: On a lot of the shows you’re in, there’s an ensemble around you, but they are generally less dangerous characters. On PRISON BREAK, you start out playing the only person without a rap sheet …

FEUERSTEIN: Right. Yeah, I am the perfect husband to Sara, whose heart will be broken and shattered when she goes back to her husband. But there’s a little more than meets the eye, and you’ll have to watch to see what I mean by that, but I’m a professor of chaos theory, and I have some awareness of what’s going on with Michael Scofield, and there are moments where she’ll ask me to be supportive of her going to rescue him, and that will engender some ill will and some conflict. At first, you want to feel like you’re as dark and edgy as they, and it can be frustrating to just be the perfect guy. On level, I was just thrilled to work with all these amazing actors. On another level, I thrive at getting to be the right guy for Sarah’s character, and on another, there are things that happen down the road that made my character a lot more interesting to play, and you’ll just have to watch to see what that is. 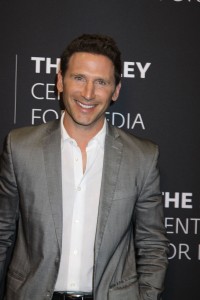 AX: And how do you feel about having a role that’s a little more physical? You did get to do physical things on ROYAL PAINS, but your very first episode in PRISON BREAK, you get shot, albeit non-fatally.

FEUERSTEIN: This is just another level of high drama, high stakes. It was life-or-death stakes when I was trying to save lives in the Hamptons, but it was a little bit of a lighter show, so it was great to be in this hard-hitting, hardcore dark drama.

AX: Well, given that Jacob is a professor of chaos theory, is he professionally gratified by all the chaos that erupts?

FEUERSTEIN: Yes, for his professional life, it’s great. For his personal life, it sucks. Great to observe and learn by the master, horrible to have to live.

AX: Did you have to be squibbed up to get shot, or was that all done with CGI?

FEUERSTEIN: They did it with CGI. I didn’t have to be squibbed up. But I would have like to have been. I love doing a little action sequence. I’ve never been squibbed. But I did a scene in DEFIANCE where we ran through all these exploding mortars and it was amazing, with Daniel Craig, had the best time. I loved it.

AX: Do you get any physical fights in PRISON BREAK?

FEUERSTEIN: I do. There are some physical interactions and altercations.

AX: Did you have to prep for it, or train for it?

FEUERSTEIN: Oh, yeah. We had some great prep, amazing fight coordinator [Lauro Chartrand], loved all of that stuff.

AX: How is Sarah Wayne Callies as a scene partner?

FEUERSTEIN: She’s amazing. She’s so smart and so respectful of the process. I just had a blast acting with her.

AX: How did you feel about the ending of ROYAL PAINS? Were you ready to bid Hank Lawson goodbye, or do you wish it had gone on?

FEUERSTEIN: I love those eight years more than you know. I was in heaven. I love those actors, I love those writers. We were such a family. It will never be the same again on anything, so on one level, I never wanted it to end. I didn’t. It was the greatest gig of all time. On another level, the characters had lived their teleological arcs. They had found themselves, they had suffered, they had been broken, they had put themselves back together. Hank learned how to connect with his patients, then he also went back to thinking about a hospital job, and in the end, he found Jill and they ended up in the Hamptons, as they should have been. I thought [ROYAL PAINS co-creator] Andrew Lenchewski did such a brilliant job with the finale, and I couldn’t ask for more.

FEUERSTEIN: [9JKL, now in post-production] possibly a show that I created with my wife, Dana Klein, for CBS, a sitcom based on my family in New York.

AX: And what would you most like people to know about PRISON BREAK?

FEUERSTEIN: That it is even more intense and hard-charging than the original, and you won’t believe how dark and intense it gets.