The performer talks about playing a nurse in the Lifetime thriller 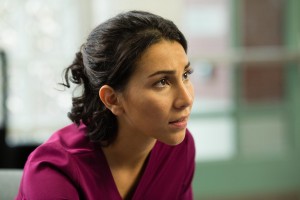 In the thriller FORGOTTEN EVIL, premiering Sunday, March 12, on LMN (the Lifetime Movie Network), a young woman, played by Masiela Lusha, is saved from near-drowning, only to find that she cannot remember anything about her previous life. This leaves her vulnerable to sinister manipulation by people who may or may not be strangers.

ASSIGNMENT X: Did you do any research into playing a nurse?

ANGIE TEODORA DICK: Yes, I have a few friends that work in hospitals, so when I knew I had booked the role, they were my first call. My basic questions pertaining to the script were, as a nurse, would I actually be able to take a patient to my home to stay with me. as Mariah does? I found out that legally it’s frowned upon, because if I were to choose to do that, I would be completely liable for anything that would happen to that patient. This opened up a completely different question to me, as to why Mariah would take this risk. As an actor, I had to come up with a back story to answer this question.

Also, when we were shooting, we were fortunate enough to have real trained nurses on set that were able to teach me and the other actors in the opening scene, when Renee wakes up for the first time in a panic, the appropriate way to handle patients in a hospital. Also, my mom worked as an RN when I was younger, and I can remember all the hours she put in, which were a lot. So all these different pieces help me have a better understanding of the character I was playing.

AX: Why do you think Mariah decides to take Renee home with her?

DICK: Logically speaking, Mariah didn’t make a good choice by taking Renee in. But that’s one of the things I loved about Mariah as a character, her empathy for Renee and this desire to help her at the risk of Mariah’s career. In conjunction with my back story, Renee had been in the hospital for six months before she ever work up, and I was taking care of her that whole time in her recovery. With the tests that we would have given her, I made the choice that Mariah knew Renee had been through trauma and most likely some sort of abuse, due to previously healed injuries that would have been visible in x-rays or any other type of tests we might have done.

When Renee finally wakes up, I feel that Mariah had gained a bond with her while she was sleeping, of wanting to protect her. No family had ever come to seek her out, so my only hope as Mariah was that she would be able to tell us what happened to her, so she could have justice. When we discover that she does have amnesia, which we had known was a possibility, I knew there was no way in hell Mariah was going to let her go on her own. I felt Mariah had the skills and the knowledge to be able to help Renee, and also was medically training for anything that might come up.

Also, the bonding that happened between these two characters after Renee wakes up I feel only solidified her decision, because Renee was no longer a victim to Mariah, but felt more like family, and since Mariah had similar trauma in her childhood, she wanted to be there to show Renee that there is “life after death,” so to speak, and that this experience would help her to become a stronger person, a smarter person. Mariah was not going to let her give that up, because I feel in these types of situations, the only thing you can be is strong, be thankful you survived, and try to be an example for the next person or someone else who may have to go through a similar experience.

AX: What did you enjoy most about playing Mariah?

DICK: I love that she was a real person with real emotions. She had compassion and warmth for people, which initially drew her to becoming a nurse. She had a desire to help people, which means she had a big heart. But at the same time, she was strong and a force to be reckoned with. She was smart and aware, which made her someone you couldn’t take advantage of. And on top of that, she was fun. She was able to play, as we see in the karaoke scene. The movie has some very serious moments, so it was nice to be able to let Mariah cut loose and show that even serious, hard-working people are normal and still know how to have a good time.

AX: What were some of the most challenging scenes for you in FORGOTTEN EVIL?

DICK: I would say the stunt scene, solely because of the physical exertion that was needed in order to get the scene done. Yes, all of us actors did our own stunts, which was fun and exhilarating, but I believe it also helped me personally become more in tune with my character, to be able to feel what she was going to and relate – but damn, I was sore. The moves came very quickly to me. Having to do them for half the day, over and over, definitely challenged my stamina, but we got through it with flying colors.

The only other challenge that was a great thing to overcome was the emotional scenes. A lot of times, we were moving so quickly that in one scene, Mariah’s character might be happy, or in focus mode. Then, the next scene, I’d have to switch to being very emotional, with not a lot of time in between. I think feeling rushed can sometimes mess with an actor’s process, but working with these time constraints, I was able to find a way to get me to these emotional moments quickly. And I can still utilize what I learned moving forward to different roles that may require the same emotional need under stress and pressure.

AX: What would you most like people to know about FORGOTTEN EVIL?

DICK: That this movie was not have been possible without everyone involved putting their hearts and souls into it. Cast, crew, extras, and the town itself. We constantly felt so welcomed by the town, I feel like it made my job as an actor easier and it really helped me to click in with Mariah and the type of place she grew up in. Also, with collaboration and hard work, anything is possible. This movie worked because we were a team and we were constantly there supporting each other, even during the hard moments.

Related: FORGOTTEN EVIL: Actress Masiela Lusha from SHARKNADO to sleeping with the enemy