The actor talks his complex character 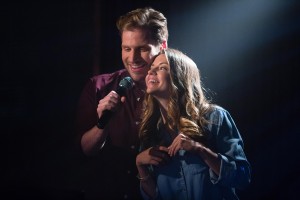 In FORGOTTEN EVIL, which premieres (tonight) Sunday, March 12 on LMN (the Lifetime Movie Network), Kyle McKeever costars as Randy Dumas. Randy embarks on a romance with an amnesiac who calls herself Renee, played by Masiela Lusha. Someone tried to murder Renee, which resulted in her memory loss, and now, in the thriller written and directed by Anthony C. Ferrante, the assailant may be stalking her again.

ASSIGNMENT X: Had you played this kind of multifaceted character before?

KYLE McKEEVER: You can find complexity in any character you play, whether you’re in a film for one scene or twelve scenes. I just shot a movie called M.F.A. that’s premiering at SXSW in a couple of days. I play a seemingly good, “all-American” guy who turns out to be a rapist. Heavy stuff. I tend to get cast as the bad guy with a lot of baggage, so it was nice to play a well-intentioned guy like Randy.

AX: How easy or difficult was Randy to play?

McKEEVER: Randy is a guy Renee meets in the hospital while she’s recovering from someone’s attempt to murder her. They literally bump into one another in the hallway, have an instant connection, and begin dating. Renee has amnesia, so Randy is by her side throughout the film to support her in the search for answers about her past. Masiela gave such a powerful performance that it was easy to just react off her and play that loving boyfriend role.

AX: How different was working on a low-budget thriller like FORGOTTEN EVIL than working on a bigger-budgeted project?

McKEEVER: There’s definitely less waiting around! On a big-budget film, you’re allowed to take your time with each scene. On something like this, time is money, so things move pretty quickly. It’s a blast, though. It elevates everyone’s performance, cast and crew. We all know that we don’t have as many opportunities to mess up, so it keeps us on our toes.

AX: Which scenes were especially challenging/interesting to film?

McKEEVER: I honestly loved all my scenes with Masiela. That relationship was interesting to me, because Randy has to treat Renee with kid gloves a bit, without making her question her strength to keep fighting for answers. We wanted the relationship to feel new, which it really was for Masiela and I, but finding that giddy “I have butterflies” feeling was fun for us. You need to feel comfortable with each other to go there.

In terms of a challenging scene, I thought when Renee and Randy first meet was a tough one. We were extremely rushed on time and had a bunch of extras, so the pressure was on to get the shot. Anthony wanted an authentic “bump-in” to happen. He literally wanted Masiela to bump into me in her wheelchair. It’s a lot harder to make something like that look natural and not cheesy. We eventually got it, right?

AX: You had to sing in the movie. How daunting was that?

McKEEVER: I did musical theatre growing up and I absolutely love karaoke, but yes, that was daunting. Angie [Teodora Dick, who plays Renee’s nurse/friend Mariah] sang before us, too, and she can really sing, so that put some added pressure. Plus, the extras in the bar aren’t allowed to actually clap or make noise after you sing. They have to mime it all, so you never really knew how bad you actually were. Anthony wrote a beautiful song [with songwriting partner Robbie Rist], though, and he really wanted it to come off unrehearsed and slightly awkward. It definitely did.

AX: Did you do any kind of research for the character?

McKEEVER: I created a back story for Randy that helped me flesh out who I wanted him to be. We also worked with Anthony, as a cast, to find our characters. Line by line, even. He let us contribute our own ideas to the script, which was extremely helpful in owning our characters. We ended up rewriting a bunch of lines until we felt they rang true for us. Anthony didn’t want us to say anything that felt false or fake. He is a really generous director to his actors.

AX: Anything else you’d like to talk about regarding FORGOTTEN EVIL?

McKEEVER: FORGOTTEN EVIL is an edge-of-your-seat thriller. I’m not just saying that because I’m in it. I was very suspicious of every single character at some point in the film when I saw the first cut. It’ll keep you guessing ‘til the very end …

Related: FORGOTTEN EVIL: Actress Masiela Lusha from SHARKNADO to sleeping with the enemy