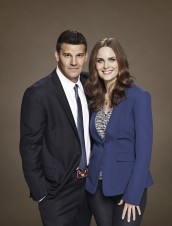 The EPs/Show Runners Talk the End of the Series

BONES is now in its twelve-episode twelfth and final season Tuesday nights on Fox Network. The series, developed by Hart Hanson from the life and writings of Kathy Reichs, is a romantic comedy/drama procedural (covers a lot of bases, doesn’t it?) about forensic anthropologist Temperance “Bones” Brennan (Emily Deschanel) and her now-husband partner FBI Special Agent Seeley Booth (David Boreanaz).

While this season proceeded with the knowledge that it would be the last, BONES has almost ended a few times before. At the end of Season 10, Brennan and Booth quit their respective jobs in the finale – only to come back in Season 11 and become guilt-stricken over all the murders they could have solved while they were gone.

BONES executive producers Jonathan Collier and Michael Peterson answer questions about that Season 10 ending, mildly disagree over whether the BONES-verse includes actual ghosts or not, and give some hints about what to expect for the rest of Season 12.

ASSIGNMENT X: At the end of Season 10, when Booth and Brennan quit, when you came back, did you think beforehand, “Actually, they’d have tremendous guilt if anything whatsoever happened after they left,” or did they just have to have tremendous guilt in to get them back into their jobs so the procedural could continue?

JONATHAN COLLIER: That was a tough one. That was the toughest type of ending to write, because we didn’t know if we were coming back or not, so it had to be one of these things you could come back from.

MICHAEL PETERSON: Well, the transition was odd, because [executive producer] Stephen Nathan was still running the show at the end of 10, and then he left at the end of it, and so we had to answer the question that he proposed at the end there, we had to figure out our own way to have them come back.

COLLIER: Right. I actually wrote that ending with Stephen, though. Stephen and I co-wrote that episode, and our main thing was just survival. We were thinking, “We’re treading water here. How are we going to keep the characters interesting? How are we going to do something that could be both a satisfying ending to the show and not be a rip-off if we come back to the fans? We want to be respectful to the fans, too.” And the next year, Michael and I came up with the answer that I think made the episode work, but we came up with that really on the B side, after the fact.

PETERSON: And the truth is, that wasn’t even our first pass on the episode. Originally, the SLEEPY HOLLOW crossover was going to be the first episode coming back. So we had written an entirely different one coming back, but then some scheduling things didn’t go through, so we had to scramble at the last second and figure out a new way to bring it back that wasn’t involving a Headless Horseman. So it turned out better that way, I think.

COLLIER: It all worked out. All these things that they’d handed us turned out for the best.

AX: Speaking of SLEEPY HOLLOW, has it been established that ghosts at least do exist in the BONES universe?

COLLIER: No. They don’t. They certainly don’t exist to Brennan, and they could exist to Booth, but we haven’t established they definitively exist.

COLLIER: But that’s spiritual more than about ghosts.

PETERSON: Cyndi Lauper [as usually accurate psychic Avalon Harmonia] is going to be returning for Episode Eleven, and her perspective of what is to come is going to be key to what’s going to happen.

AX: But wasn’t there an episode that was essentially from the point of view of a ghost?

PETERSON: I think we certainly have those episodes. There’s also an episode where Brennan sees the ghost of somebody who died in Booth’s unit. So yeah, I can say that we charged into that territory, we have said that they do exist, but we don’t focus on it by any means.

COLLIER: And it always could be explained as something else.

AX: Are the two of you, Jonathan Collier and Michael Peterson, going to be partnered on your next project?

COLLIER: We are. We’re doing a pilot together.

AX: Can you tease the subject matter at all?

COLLIER: I don’t know if we can or not, so I’d better not. But we’re excited about it. And I’d say tonally I think BONES fans would love the show.

AX: And what would you most like people to know about your ride on BONES?

PETERSON: A lot of shows talk about “it’s a family,” but this one was unique in what Hart brought to this, and not a lot of people get to go from staff writer to show runner, and that’s because of the kind of nurturing environment that’s there, so it’s a blessing.