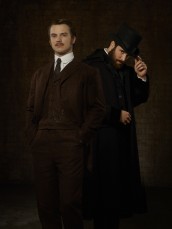 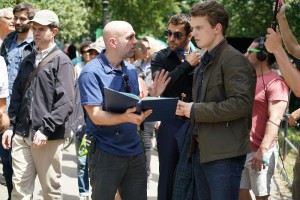 ABC’s new Sunday night series TIME AFTER TIME is based on the cult classic 1979 film, about nineteenth-century science-fiction writer H.G. Wells chasing his erstwhile friend John Stevenson – aka Jack the Ripper – into the present and finding love with a modern woman.

Kevin Williamson (the SCREAM films, DAWSON’S CREEK, THE VAMPIRE DIARIES) has adapted TIME AFTER TIME for television. He and his fellow executive producer, director Marcos Siega, talk about turning the story into a serial. Williamson also briefly talks about the series finale of THE VAMPIRE DIARIES, which airs this coming Friday, March 10.

ASSIGNMENT X: Although you’ve got the word “time” in the title twice, TIME AFTER TIME isn’t really a time-travel show. Once the main characters are in the twenty-first century, they pretty much stay here …

KEVIN WILLIAMSON: It’s true. That’s the one thing that I wanted to get out is that we’re not really a [time-travel] show, we’re more the H.G. Wells story, that we’re a story about young H.G. Wells [played by Freddie Stroma] and his adventures in modern-day New York and how they inspire him to go back and write THE TIME MACHINE, THE INVISIBLE MAN, THE ISLAND OF DR. MOREAU and ultimately THE WAR OF THE WORLDS. I’m spoiling the show [laughs].

AX: Even though you’re not time-traveling much, is it easier to make this show at a time when time-travel is its own subgenre?

WILLIAMSON: Yeah. Every time-travel show sets their own rules, and their own loopholes, and their little wiggums, or whatever they call them. But I feel like we’ve covered our rules for our show, and we don’t really break them in our Season 1. Moving forward, we have a plan for Season 2 that would spin it in a new direction.

AX: Did ABC come to you with this project, or did you bring it to ABC?

WILLIAMSON: I took it to ABC. Warner Brothers, where Marcos and I have our deal, had the project, had the movie, owned the rights, and we saw it in the library, and it was like, “Oh, that’s the one. That would be a great idea for a limited series.” And that’s why we only did twelve. And hopefully moving forward, we would be talking about twelve [episodes per season].

AX: With the first twelve-episode season, is there a cliffhanger, or an end point?

WILLIAMSON: There’s an end point and a cliffhanger. We wrap up the loose ends, and we launch into a new story.

AX: What captivated you so much about the original TIME AFTER TIME movie?

WILLIAMSON: The love story, the idea that he came through time and he found this woman [played in the TV series by Genesis Rodriguez] and that love conquered all. I thought it was an epic love story. And we create a mythology for this show, which is very similar to VAMPIRE DIARIES in terms of the style of the show.

We build our own mythology, whereas other time-travel shows seem to be doing big events. We’re doing a story of two families, and it’s ultimately about family. It’s about the Anders family and it’s about the Monroe family. And as you read THE TIME MACHINE, it’s all about class struggle. And you meet Nicole Parker [as Vanessa Anders], and she’s this successful billionaire, and then there’s another family that feels like they’ve been robbed, and they’re going to use the time machine to get revenge. So there’s a very personal story. We don’t go wildly huge and epic and worldly with it. We keep it very contained and small, but this very, very personal story ultimately leads to the fate of mankind lies in their hands [laughs].

AX: At least in the first episode, you have direct dialogue quotes from the film – Wells’ “The first man who raises a fist is the man who’s run out of ideas” and Stevenson’s “I’m home” when he realizes how violent our current world is. I did miss the joke about “If you go north, you get to Scotland,” but you couldn’t include everything …

WILLIAMSON: I couldn’t, no. I have forty-two minutes. We tried to put the best ones in.

AX: You’ve dealt a lot with serial killers in almost all of your other work. What makes Jack the Ripper, or John Stevenson, as played by Josh Bowman, different from them?

WILLIAMSON: Well, the one thing Marcos and I didn’t want to do was THE FOLLOWING, of someone chasing someone through New York and every week missing him. So I quickly took the character of John Stevenson, who is a psychopath, but he’s also a doctor. He’s very similar internally to the character of Griffin in THE INVISIBLE MAN, which is this crazy, narcissistic, super-powered man who ultimately is this isolated human being, and what would happen if he came to New York and tried to reinvent himself? What would happen if he actually thought, “I am a crazy man. Something’s wrong with my head. Something is wrong with me, but I can fix it and I can change.” And of course, crazy can only change so much. Crazy is crazy. So he just becomes crazier.

AX: The look of the actual time machine has changed from the film. What was behind the design change?

MARCOS SIEGA: Because it was its own machine and it had to be different. It was hard – we talked about it. Time machines – you say “the Time Machine” to someone, they kind of have an idea of what it looks like. We also needed the time machine to support some of our story. It had to be a capsule, it had to be enclosed.

WILLIAMSON: It was steam-punky, because it was the Industrial Era, back in 1893. 1893 was the start of the Industrial Revolution, so we used some of the elements that would have been used back then.

SIEGA: And some of the story we knew Kevin wanted to write [required that] it couldn’t be the open sort of sled, it had to be a closed capsule.

AX: Can you talk about the look of your TIME AFTER TIME?

SIEGA: We wanted to keep it simple and classic. I actually didn’t watch this movie, because I was afraid of copying it. Kevin would talk about it so much that I was like, “I know what’s going to happen – I’m going to watch it, and I’m going to want to default to maybe doing something that they did.” So I purposely stayed away from it, and just kept the look to a sort of classic cinematic style.

WILLIAMSON: We wanted to do sort of a throwback to those old Amblin movies –

SIEGA: Not so much an homage to it, but just the style of how they shot it. We kept things very simple. The camera only moves when actors move.

WILLIAMSON: I am a child of Spielberg. I miss all those epic movies and all that epic score and all that. So we designed the score, the look, the show – we wanted it to feel epic.

AX: Why was the present-day setting changed to New York from San Francisco?

WILLIAMSON: Yes, and also, I thought it was a really great change, because it is sort of the heart of America in a lot of ways. There are so many different industries. San Francisco, while gorgeous and beautiful, is not production-friendly on a weekly basis. We’d have to cheat it here in L.A. or somewhere, and New York, we can actually stand in New York City and get the production value. And New York City is the greatest city in the world [laughs].

AX: Since all of the original leads of TIME AFTER TIME are still with us, thank goodness – Malcolm McDowell, Mary Steenburgen, David Warner – might there be any cameos?

WILLIAMSON: No, not in the first twelve. We actually talked about it, and we even looked into it, but there were some availability issues.

AX: Was there any temptation to keep H.G. Wells’ nineteenth-century mustache?

WILLIAMSON: We couldn’t shave that fast enough. That was actually a big question. That was a lot of phone calls with the network – “When is that coming off?”

AX: With John Stevenson, in the nineteenth century, he had a sort of hipster beard …

WILLIAMSON: It was very hipster-y. We could have kept it, but it was a nightmare to glue on.

SIEGA: We did all our wardrobe in Williamsburg. It was easy. It was hard to glue a beard.

AX: Freddie Stroma’s H.G. Wells seems conceived as a bit more innocent and a little less professorial than the one in the movie. Was that to make him more accessible?

WILLIAMSON: Well, we wanted him to have somewhere to go, but [Wells] is very scholarly in the show. He has written some academic books and he’s very lofty, and he does approach situations almost in a studious way. But he is innocent and naïve, because he’s walking into a world he doesn’t know. There is that fish out of water element, because what worked in a two-hour movie now has to work in a series that lives and breathes, week after week after week, so we wanted to start him a little more wide-eyed and innocent and dreaming of Utopia, and watching as that entire world turns. And he changes.

AX: Even though the characters are not traveling through time, there’s an awful lot of era-jumping on THE VAMPIRE DIARIES. Was that good practice for TIME AFTER TIME?

WILLIAMSON: Yeah. I was never a period person until THE VAMPIRE DIARIES. When we did Episode Five, wasn’t it, Season 1, you [Siego] directed that one, our very first period episode, and that was the first time that I went, “Oh, okay, I like this period stuff.”

AX: You and VAMPIRE DIARIES executive producer/show runner Julie Plec wrote the series finale for THE VAMPIRE DIARIES. What was it like sitting down with her again?

WILLIAMSON: Well, we wrote the first episode together, Episode One of this season. And so I got back into it, and because I knew I had to sit in the room, I had to stay on top of it, I couldn’t just sort of hide. I had to show up. And it was fun. So yes. Julie and I, a lot of tears have already started.

AX: Can you say anything about that finale?

WILLIAMSON: If I say one word, I have to go get bashed in the head by Julie. I’m not going to do it. I asked her last time we were writing [if asked by the press], “What do I say?” She goes, “Nothing.” I’m being a good boy. [laughs] As [The CW president] Mark Pedowitz said, we’re hopefully going to have a slam-bang amazing finale.