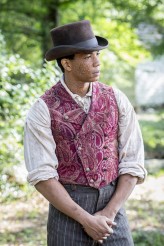 The director talks making a drama series about the Underground Railroad 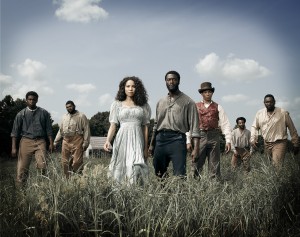 WGN America’s UNDERGROUND, premiering on Wednesday, March 9, is set in the year 1857, when slavery still plagued much of the United States and the U.S. Civil War had not yet occurred. The Underground Railroad, the dangerous network of way stations and helpers by which some people escaped their captors to the northern states and into Canada, was in its formative stages.

Anthony Hemingway directed the first four episodes of UNDERGROUND. By a coincidence of timing, he also has episodes currently airing of another very different drama that also involves race in the U.S., FX Network’s THE PEOPLE V. O.J. SIMPSON. Hemingway’s other work includes the feature film RED TAILS, about African-American aviators in World War II, and episodes of TREME, TRUE BLOOD, SHAMELESS, THE NEWSROOM and more.

AX: You’ve got episodes you’ve directed of UNDERGROUND and THE PEOPLE V. O.J. SIMPSON on almost simultaneously. So you’re directing two different shows about race in America. Does that affect your approach at all, or is it completely just about the material – one’s contemporary and one’s period?

ANTHONY HEMINGWAY: It’s all in the material. To me, what it does for me, it ignites my charge in life. Even greater is to realize that in two completely polar opposite worlds. There are so many similarities. And it all speaks to us as a people and kind of where we are socially today, versus even how far from 1857 to 2016 and everywhere in between, we’ve come a long way, but we still have so much growing to do. So it’s very interesting for me to see the common grounds there in both worlds and both stories.

AX: There was a Q&A panel earlier today about UNDERGROUND, where one of the executive producers, Akiva Goldsman, said something to the effect of, so many things get compared to slavery, and really, there isn’t anything comparable to slavery except slavery. Do you feel there’s anything that’s comparable, or do you feel that slavery is a unique subject that needs a unique approach?

HEMINGWAY: I think slavery as a subject cannot be unified because, as we see with UNDERGROUND, this is a point in time, and the angle at which we are approaching it hasn’t really been tapped into, so for me, it’s a fresh approach. It’s being allowed to create a new language and to kind of find ways of capitalizing on the purpose of the story, and from there, figuring out how we are to tell it.

For me, it was very exciting as a filmmaker to be able to find a new voice, because one of the important things I wanted to be able to convey – I wanted to be able to connect to the millennial generation who really have no idea what this story is, who these people are. I talk to young people, and I talk about the Underground Railroad, and they look at me cross-eyed. So I knew there was a challenge to connect to them, because it’s important for them to see and to know it.

So we made creative choices in how to approach and how to connect to them. And that was through music, and for me, giving it a veneer that had a fresh approach, even kind of a softer [visual] palette. So I don’t think we can sit and say that it’s all the same, because it’s different. What we were looking and hoping to do was not really try to retell history, because we know what history is, we know this period, and we know what slavery is. What we wanted to do was to rise above that and really connect to the revolution of [the Underground Railroad] and shine a light on the hope that was there, that is less tapped into and told. These characters really had such a vibrancy to them, they were so courageous and skilled in ways that they used what they had. They made lemonade out of the lemons they were dealt, and it just possesses great role models and positive images, and I think it’s so important for all of us to see that, because what they did – at its core, UNDERGROUND really talks about family, family broken, an unconventional approach to family, but at the heart of that, what family means. I think we need more representations of that, and that was one of the exciting things for me in approaching UNDERGROUND from my first read. It was a page-turner that I couldn’t put down.

AX: John Legend is another executive producer on UNDERGROUND, who has brought in a lot of popular music. Do you feel that using the contemporary music helps sort to kind of cue millennial viewers in to, “Okay, this is how we can think about this, this song we know relates to the story being told”?

HEMINGWAY: Absolutely. I think those creative ways were what we wanted to be able to at least make it inviting for people – even ones who think they know what this is, but will come to it and realize it’s completely not what they thought. We wanted to defy tradition and that conventional approach to it and really present something in a fresh new way. So I’m hoping that the sound, the look of it, as we know, so much in this world is so textural, we want to be able to reel ‘em in, pull ‘em in, and then they’ll join the ride.

AX: Where did you shoot UNDERGROUND? Were there any standing buildings or sets that you could use, or did you have to build everything?

HEMINGWAY: We were blessed and fortunate to have over a million dollars of production value already standing for us at the LSU [Louisiana State University] Rural Life Museum. That’s part of the LSU campus in Baton Rouge, Louisiana, which is where we shot. They have [reconstructed] slave quarters. It was so much production value we would never have been able to afford, and we were the first film company that they allowed to come in and shoot. So it was very special. It definitely raised the stakes for everyone involved, especially the actors, once they got to be in somewhat of the real deal, not anything that was really fabricated. I mean, we tweaked and twisted things according to our own creative choices, but for the most part, they were real slave shacks that we shot in, and it completely changed the dynamic of all our approaches.

AX: Did you have to have a lot of time-outs for people becoming emotional while you were filming?

HEMINGWAY: It happens. As Jurnee [Smollett-Bell, who plays Rosalee] said on the stage, the moment, the scene where she was punished [and badly beaten] for trying to protect her brother was beyond surreal. After we shot it, I held her in my arms and hugged her so tightly for at least ten minutes. It sent a chill across the air amongst everyone from craft service to the Teamsters to the extras, all the actors, all the crew, and it was remarkable. It was just so silent. And after we shot the scene, we broke for lunch. So everyone’s sitting in the catering tent, quiet. It just was very chilling.

AX: What would you most like people to know about UNDERGROUND?

HEMINGWAY: It’s special. A lot of blood, sweat and tears went into making this, to share such great awareness with the world, and I really hope it’s appreciated and championed and supported.

This interview was conducted during WGN America’s portion of the most recent Television Critics Association press tour in Pasadena, California.