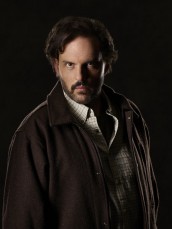 GRIMM: Silas Weir Mitchell on the 100th episode of the NBC series – interview 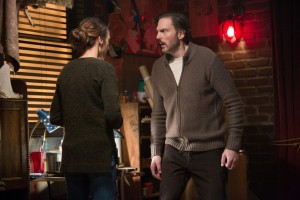 Five seasons in, faithful fans are glued to the adventures of Portland, Oregon police detective and hereditary Grimm Nick Burkhardt (David Giuntoli), who has learned that even though some Wesen – creatures that can pretend to be human but are actually something else – are evil, many others are good, and some even make good friends.

A case in point is Nick’s best friend Monroe, played by Silas Weir Mitchell. Monroe is a Blutbad (sort of a werewolf), a clockmaker and watch repair technician who is married to the Fuchsbau (kind of a fox) herbalist Rosalee (Bree Turner).

To celebrate GRIMM’s hundredth episode, SAG/AFTRA is holding an event for their members and the series’ actors. Before the Q&A, there’s a red carpet, where Mitchell happily expounds on what he thinks keeps GRIMM going.

AX: What can you tease about the hundredth episode?

SILAS WEIR MITCHELL: It’s one of the best episodes we ever made. It’s a lot of treasure-hunting and derring-do and scary, fun stuff. It’s really great.

AX: At what point did you think GRIMM might make it to a hundred episodes?

MITCHELL: It never crossed my mind, honestly. At a certain point, you get to a place where you’re in the fourth season and you realize, “Okay, we’re going to get a fifth,” and then someone says, “You know, the twelfth [episode] of this year will be your hundredth,” you’re not thinking in those terms until someone says it. And thinking back on it, it’s kind of hard to believe. I mean, nobody thought this show was going to do anything when we started. And we had a little following, because of David Greenwalt and [his work on] BUFFY, and the fans got us where we are today, so thanks for following us.

AX: How would you say that Monroe has changed since the pilot up until now, what has been his biggest development?

MITCHELL: Well, there have been ups and downs, but I would say generally the biggest change was probably coming to terms with the value of being able to use my inner Wesen for good, as opposed to just trying to keep it in the basement. Every now and then, you let it out, but it can do good, and that I learned from Nick. And of course, there’s the love thing, where I was sort of domesticated for a little while, but then as soon as [Rosalee] was threatened, I got to get my badass on again, so those have been a couple of colors that they’ve been fiddling with.

AX: How did you feel about having Dee Wallace and Chris Mulkey coming in to play Monroe’s Blutbad parents?

MITCHELL: That was great. They were both awesome. They were really fun to work with, they fit right into the show, they were just delightful. There was a really good chemistry from the beginning, so that was fun. I hope they get to come back at some point.

AX: Do the other actors playing Blutbads look to you for pointers on what a Blutbad acts like?

MITCHELL: Yes. Well, what people ask all of us is, “What’s the deal with the morphing?” You sort of help people realize, “The digital team just needs some movement.” Early, early, early on, like second, third, fourth episode, there were some people who were morphing and they weren’t doing anything, they were just standing there, and it looks very strange when a face changes, but the actor isn’t doing anything. So they realized they needed some movement. That’s kind of how I started. I started just doing this thing [he makes the signature movement of Monroe performing a Volge – revealing that he is a Blutbad] that felt like something was coming out.

AX: How long would you like to see GRIMM go?

MITCHELL: I think one more year would be great.

AX: And after that, you want to hang up your teeth?

MITCHELL: I think so. I hope we get one more year. One more year, and let everybody know that it’s the end, and then people can tune in and watch the thing wrap up. What I would hate to have happen is that we just get pulled, and then diehard fans are just left in the lurch. That I think would be not cool, so hopefully that doesn’t happen.