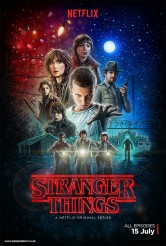 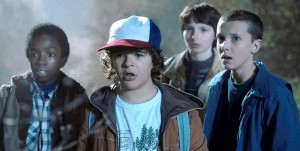 Netflix’s cult hit STRANGER THINGS, now streaming its first season and renewed for a second, was created by brothers Matt Duffer and Ross Duffer to resemble Eighties movie hits like E.T., POLTERGEIST and THE GOONIES. Now fourteen-year-old Gaten Matarazzo plays Dustin Henderson and Caleb McLaughlin plays Lucas Sinclair, two young boys who make up part of a small group secretly searching for their missing friend, who may have disappeared into another dimension. Help includes the mysterious Eleven (Millie Bobby Brown), who has telekinesis; problems are a laboratory conducting unethical experiments and a monster that seems to have come from somewhere not of our realm.

Matarazzo and McLaughlin are greatly enjoying the success of STRANGER THINGS and are happy hang out with each other while talking about it.

ASSIGNMENT X: Do you guys watch the movies from thirty years ago that are referenced by STRANGER THINGS?

CALEB McLAUGHLIN: STAND BY ME, E.T. …

GATEN MATARAZZO: Yeah, a lot of these movies back then were really authentic [in the way they showed friendship], and they were original ideas. So many of the movies you see now are based on true events, or based on books, or documentaries. You never see an original story any more. THE GOONIES is completely original. It’s not based on anything. These are all movies and stories that are completely original and not based on anything. They’re just really authentic and just good movies.

AX: Do you find the premise of STRANGER THINGS scary, this idea of something hostile punching a hole through the dimensions and coming through to our world?

MATARAZZO: Yeah. It’s just like the fact of something that has always been like, “Look out for the boogeyman under your bed.” You’re like, “Ah-hah-hah.” The fact that, if this were real and if this happened, if something you knew was coming after you that you knew you couldn’t face, you’d think, “Well, we have weapons, we have defense.” If you can’t stop this, this thing that scared you, [what’s scary] isn’t that it’s going to kill you, it’s that you can’t stop it from killing you.

AX: Are you a horror fan besides working in STRANGER THINGS?

MATARAZZO: I am. Very. I love horror films – the ones I can watch, at least [laughs]. Some of them are a little graphic.

AX: Which are your favorites right now?

MATARAZZO: I love the INSIDIOUS trilogy, I love THE CONJURING, but I also love horror movies like NIGHTMARE ON ELM STREET and FRIDAY THE 13TH, those movies from back then.

McLAUGHLIN: CHUCKY – I like the comedy type of scary movies also.

McLAUGHLIN: Yeah, I love that. And FRIDAY THE 13TH, Michael Myers.

AX: You get to do a couple of different things here as actors – you get to play friendship, and you also get to play fear. Do you have a preference one of those types of scenes over the other?

MATARAZZO: No, I’ve always been like, “Oh, man, I’ll get to play that guy in the horror movie, I’ll get to be that one that gets scared.” But it really is so much more fun to play the friendship part of it, because it’s like when you’re being friends with someone that you’re actually friends with while you’re acting. It’s just so much fun, because it feels so natural. The natural feel makes it so much better. It’s great. When you get along outside, it’s just so much better. So I enjoyed all of it, but the friendship really stuck with my heart.

McLAUGHLIN: I like being scared also, because it gives you a new, different thing. I feel like there’s always the good thing in the movie, but the bad thing gives you a different spark, and it always expands your acting abilities, so it was pretty fun doing that.

AX: Did the Duffer Brothers both direct episodes together, as well as create STRANGER THINGS?

McLAUGHLIN: They are the fathers of this.

MATARAZZO: Well, I wouldn’t know, because this is my first big TV role. I did one episode of THE BLACKLIST, that was with one director. I like how they did two directors, because there’s this compromise, and there are two different working minds that come together, and it really just becomes so much more, just better. Because there’s more variety when there are two minds with more thoughts. And with more thoughts, there’s more of a story.

McLAUGHLIN: And also, when you’re on set, and one director’s busy, you’ll be like, “Oh, hey, I can talk to the other one, ask him questions about my character or whatever.”

AX: And what do you most hope that people get out of STRANGER THINGS?

McLAUGHLIN: Yeah. I hope you love the comedy, the drama, the romance, the supernatural thriller, the action/adventure. It brings you all that. It’s family-friendly.

McLAUGHLIN: These are totally new characters, these are new and fresh. And everyone has their favorites, their opinions on the characters. There’s no character that’s just “eh.” All of them are at the same level, but it just gives you something different for a different individual.

This interview was conducted during Netflix’s portion of the summer 2016 Television Critics Association press tour at the Beverly Hilton Hotel.