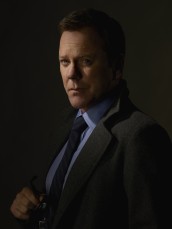 The series creator talks about Sutherland playing the U.S. President 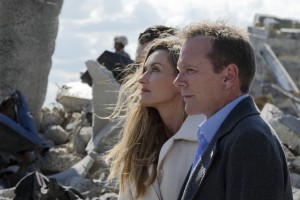 In ABC’s new Wednesday-night drama DESIGNATED SURVIVOR, Kiefer Sutherland stars as Tom Kirkman, a low-level government department head who suddenly finds himself President of the United States when a State of the Union address is lethally attacked by persons unknown.

David Guggenheim, who wrote the films SAFE HOUSE and STOLEN, is the creator of DESIGNATED SURVIVOR. There really is such a status, a government member who is kept separate from events in case of an unlikely disaster that takes out the U.S. President, Vice-President and Speaker of the House. The series also deals with Tom’s relationship with his wife, played by Natascha McIlhone, and his children, the investigation into the attack, and trying to get the government to function at the same time it must be largely put back together.

ASSIGNMENT X: Is Tom going to be presiding over fifty Congressional elections at once?

DAVID GUGGENHEIM: Yeah. We’re definitely rebuilding the government, and repopulating the Senate and the Congress is definitely a story to be told. So he is overseeing that entire process. It’s a process involving all the governors who appoint senators [when one is lost during a non-election period] and they have special elections for the House, and appointments for the Senate. So it’s all about also working with the governors and repopulating everybody. So yes, we’re going to play those stories over time.

AX: And without getting too spoilery, are any of the big suspenseful things like who is behind the attack and whether the planned coup against Tom succeeds going to be resolved in Season 1?

GUGGENHEIM: Yes. I don’t like that shows that keep a mythology on longer than it should be on. And this is a central mystery that can be solved, and will be solved, in one season. Not just who blew up the Capitol, but why they blew up the Capitol and how is just as interesting a mystery to me. How did they actually, conceivably get the devices in there to do it?

AX: What would you say is the draw for people to tune in to DESIGNATED SURVIVOR?

GUGGENHEIM: Well, there really is nothing else like it on TV [laughs]. There’s been more and better television [available recently] than I’ve ever seen in my lifetime. I grew up on three networks, and now there are three hundred. I’m sure there are even more than that. So yeah, it’s a huge competition. But I think for something like this, there’s such a compelling concept to it, and a hook to it, that I think it delivers on the thriller aspect, so if you’re a thriller fan, it delivers on the family drama aspect, and it delivers on the political aspect. So it does have these three great gears working for it. And also, we do have Kiefer Sutherland, who automatically is the greatest draw there is. If you’re really interested in great human character drama, I think this is the show to watch. It has really personal stakes, but then also macro, giant, global, international/domestic stakes. So I think it just has a little bit of everything for everybody.

AX: When casting Kiefer Sutherland, did you think, “Okay, everybody thinks his middle name is ‘Political Thriller,’ so that will say, ‘political thriller’ to viewers,” or did you worry, “Won’t people expect a character played by Kiefer Sutherland to punch out anyone who gives him trouble?”

GUGGENHEIM: I did. I was worried, because you know him so well as Jack Bauer in the world of TV, obviously, but the minute he started talking about the character, and the minute I saw him do the character, it all stripped away. I forgot about Jack Bauer in about two seconds. It’s pretty amazing, his transformation. [Tom] doesn’t know anything. He doesn’t know his way around the White House.

AX: You’ve said when Kiefer Sutherland initially read the script, he didn’t have any notes or changes for you. Did you just think, “He has no notes, he’s my new favorite actor, marry me”?

GUGGENHEIM: That was definitely a part of it. Even if he had a ton of notes, it would have been, “Marry me.” And his notes in further episodes have been so spot-on and great. It’s a pleasure. I’m really not kidding you. It’s amazing getting his notes, the insight that he has on the character and the stories, it’s so fantastic.

AX: You also have Kal Penn playing Tom’s chief speech writer. Since Kal Penn actually worked for the Obama administration, what kinds of conversations do you have with him?

GUGGENHEIM:  [Penn is] also a consultant on the show, so it’s fantastic. I get amazing notes from him on every script, and incredible insight, and he adds, obviously, an authenticity to the show that is second to none. To have someone actually who is acting in the show, and worked in the White House, and he’s standing on our Oval Office set, and he’s actually been in the real Oval Office, that’s phenomenal.

AX: Was that part of the thinking in casting him?

GUGGENHEIM: That was exactly true. We were trying to cast Seth, and then I heard Kal Penn was interested, and I couldn’t see anyone else, and then I went, “Oh, my God, he also worked in the White House.” It was just the cherry on top and, “Oh, we have to make this happen.”

AX: Are you going to have any characters as weird as Donald Trump, or …?

GUGGENHEIM: You can’t write a Donald Trump. I don’t think you can get weirder or scarier. That’s cartoonish [laughs]. So no, it tips it over the balance, for sure.

AX: Do you feel one of the things DESIGNATED SURVIVOR is to provide a level of sanity in politics that we’re not getting in reality right now?

GUGGENHEIM: There’s an optimism we’re trying to play, and there is a sort of, “What if one of us was in the White House, and how can we approach problems with real common sense solutions, as opposed to political …?” Kiefer actually had the idea – he had one note, and it was a fantastic note, and we took it, and ran with it, which is that Kirkman’s an independent. So we really wanted to embrace that whole idea of someone in the middle, who didn’t have an affiliation with either party.

AX: Do people with no party affiliation ever get appointed to the Cabinet? We sometimes get people from a different party, but …

GUGGENHEIM: That may be part of the reason why, in the pilot, he’s asked to resign the Cabinet. It’s probably to appease somebody. First time around.

AX: Is there something you’d like to be asked about DESIGNATED SURVIVOR?

GUGGENHEIM: It’s so weird even getting questions about the show – the fact that’s a real thing right now, it’s sort of surreal for me. So I’ll take any questions that come my way.

This interview was conducted during ABC’s portion of the summer 2016 Television Critics Association press tour at the Beverly Hilton Hotel.