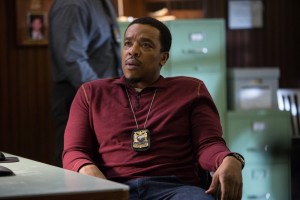 When SAG/AFTRA hosts a Q&A for NBC’s GRIMM, which has its fifth-season finale Friday, April 20, by the time Russell Hornsby gets to the Assignment X section of the red carpet, they’re about ready to pull him inside. Still, the actor, who plays Portland, Oregon police detective Hank Griffin on the show makes time to answer a few questions. Hornsby will also be seen soon in the film adaptation of August Wilson’s play FENCES, directed by and starring Denzel Washington.

AX: GRIMM has made it past one hundred episodes and will be going into a sixth season. How surprised or gratified are you about making it to number one hundred?

RUSSELL HORNSBY: I am both surprised and gratified to have shot our hundredth episode. You know, it’s one of those things that as an actor you never think will come, but it went by so fast. It came and went. Five years has come and gone in the blink of an eye. But it’s been fun. It’s been a fun experience.

AX: Given that Adalind, played by Claire Coffee, previously enchanted Hank, made him fall in love with her magically and nearly killed him, how horrified would you say Hank was that his partner Nick the Grimm [David Giuntoli] wound up having a baby with Adalind?

HORNSBY: I think Hank is quietly skeptical about the whole situation, but his whole thing is, “If you like it, I love it.” But I think if he had his druthers, he would tell [Nick] not to go down that path, but a man has to do what a man wants to do [laughs].

AX: And do you have a favorite episode or scene that you’ve gotten to do over the five years?

HORNSBY: I think everything for me that happened pretty much in Season 1 was my most enjoyable time, because it was just work that was so imaginative and fun for me as an actor.

AX: And is there anything that’s particularly interested you that you’ve learned through the course of making GRIMM, about mythology or police work, or anything else?