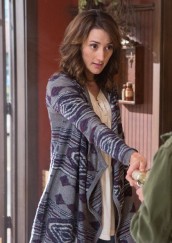 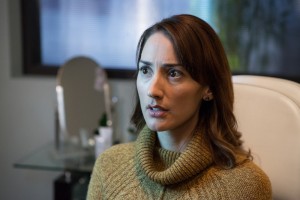 Approaching the end of its fifth season Fridays at 9 PM and renewed for a sixth, NBC’s GRIMM recently celebrated its hundredth episode. Bree Turner plays Rosalee, a foxlike Fuchsbau. When we met Rosalee way back in Season 1, she was an herbalist who inherited her brother’s quasi-mystical spice shop. Rosalee struck such sparks with Monroe (Silas Weir Mitchell), a Blutbad watch maker who is also the hero’s best friend, that the writers crafted a romance for the two. Now Rosalee and Monroe are married, but with all the danger swirling around them, they’re hardly settled down.

At a SAG/AFTRA event for GRIMM, Turner talks the show’s longevity and Rosalee’s evolution.

AX: Did you expect GRIMM to make it to a hundred episodes? When did you feel like you were completely at home in the GRIMM world?

BREE TURNER: It’s funny. Every season ends, and you have this feeling before you get a renewal that, “Are we going to get picked up?” Nothing is guaranteed, and it’s hard to sometimes remember, when you’ve been doing a show this long, that it will end [laughs]. This job will eventually end. And that’s really hard to think about, because not only have you lived with these characters for so long, but we’re family now, and we’re all up there together, so it’s going to be a very strange day. Hopefully, it’s not going to be right now [laughs]. Hopefully, we’ll squeak out a few more seasons. But I’ve always felt like the show has been very magical. I signed on late in the first season, so I was able to objectively watch the show for a little bit, and I always thought the show was very special. So whether we were going to get a hundred [episodes], that’s like crazy talk, but I always knew it had legs.

AX: Are you enjoying the tougher side of Rosalee that’s come out since she and Monroe have been in danger more frequently?

TURNER: Yes. I think this is the Rosalee we met in the beginning, guarded and a little bit more troubled, and dealing with some past demons. I think when we [first] saw her, it was a different kind of Rosalee. And then falling in love and gaining confidence in herself and her work and her talent and being vulnerable with this man, it’s blossoming into the Rosalee we now know, but I always love when they write in short-fuse Rosalee, because I feel like it needs to remind the audience that she came from a past where she was a survivor and she had no one in her corner, so she had to always take care of herself and not give a s**t [laughs]. So yeah.

AX: Having been on the show for five years now, has your interest in foxes, or homeopathy, or anything else related to Rosalee developed?

TURNER: Oh, for sure. I think also just being in the Pacific Northwest, where you’re surrounded by natural beauty and living among animals and nature, I definitely have changed a lot of how I live my daily life. I’m still a pretty hardcore coffee drinker, so the tea-drinking Rosalee side I haven’t quite adopted [laughs] into my own personal life quite yet.

TURNER: When in Portland, you have to.

AX: And what would you most like people to know about GRIMM right now?

TURNER: I think they have to buckle their seatbelts, because the scope of the show is changing. We’re full-throttle from now until the end of the season.