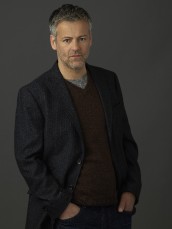 The actor discusses his latest roles 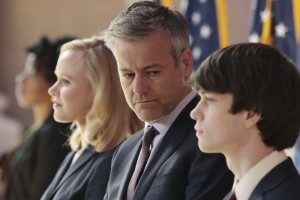 In ABC Network’s Sunday-night drama THE FAMILY, Rupert Graves plays John Warren. John, his wife Claire (Joan Allen) and their two older children, Willa (Alison Pill) and Danny (Adam Gilford), have all been damaged in different ways by the kidnapping and presumed murder of youngest family member Adam. Years later, just as Claire is preparing to run for governor, a teenager claiming to be Adam (Liam James) shows up and thrusts the family into further chaos, especially because by now they all have many secrets that have built up around the original tragedy.

ASSIGNMENT X: Is this your first American character?

RUPERT GRAVES: Yes, it is.

AX: Were you looking to do an American network series?

GRAVES: I got asked if I was going to do it I think on a Friday, and we started shooting on the Monday in Vancouver. So I literally got a work permit, got on a plane and started on a Monday.

AX: Is this different than working on an English show?

GRAVES: It is. The volume [amount of episodes] is quicker, it’s faster, there’s more to do. We do mostly on English TV fewer [episodes]. But really, filming is pretty similar, I think, the world over.

AX: Alison Pill, who plays your character’s daughter, said that despite the serious tone of the show, there was a lot of pranking during production. She was telling a story about someone sewing people’s trousers together …?

GRAVES: I didn’t, no. People did it to me [laughs]. She was talking about me extracting my revenge with brooms and other implements I used to terrorize people who were foul to me.

AX: Can you say anything whatsoever about the next season of SHERLOCK?

GRAVES: I haven’t seen any scripts yet. I just never know with that.

AX: Do you have any particular thoughts about what you’d like to see Lestrade do?

GRAVES: I think definitely Lestrade has got the hots for Molly [Louise Brealey]. So maybe … we really don’t know what happens until we see the scripts. That can be literally a couple of weeks before you film.

AX: Are you gratified that Lestrade in this version of SHERLOCK is not a twit?

AX: What do you think Lestrade would make of the various cops who are investigating the events in THE FAMILY?

GRAVES: I don’t know. The thing is, if Lestrade was in Maine [where THE FAMILY is set], I think he’d be on the telephone to Holmes straightaway to get him over. I don’t think he can operate that well without Holmes.

AX: At the outset, your character John doesn’t want his wife Claire to run for office. Is that because he’s genuinely traumatized, or because he’s afraid of the dirt that will come out?

GRAVES: I think part of him balks. Everybody’s got two sides. It’s beautifully human, this. People aren’t exactly as they seem. Everybody’s got a secret, everybody’s got a point of view. I think as far as that’s concerned, I think John feels uneasy about her using the renown she’s had through a tragedy to promote herself. She’s become a visible person and she can use that popularity to further her political career. I mean, how much he actually feels uneasy about that, or how much that is played out in the tension between two people who have suffered a tragedy – often you read about people who’ve suffered the death of a child, the relationship breaks up pretty quickly, and pretty completely. It’s not uncommon. And that is definitely an element of their relationship, John’s and Claire’s. And that’s one of his beefs against her, I think, is his unease with the way she uses the popularity she’s got, the renown she’s got.

AX: Do you have any other projects that we should be aware of?

GRAVES: Just doing some more SHERLOCKs. I did a lovely little movie for Sky Arts Channel [THE NIGHTMARE WORLDS OF H.G. WELLS: THE MOTH], about an H.G. Wells story about moths. I get to play a Victorian moth collector. It’s like an Edgar Allan Poe story, and I loved it.

AX: What would you most like people to know about THE FAMILY?

GRAVES: I’d like them to know this – as soon as they start watching, this is what I hope will happen and what I hope they’ll know about it, is that it will act like a talon and bring them in. It’s genuinely gripping storytelling.

This interview was conducted during ABC Network’s portion of the most recent Television Critics Association press tour.