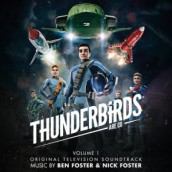 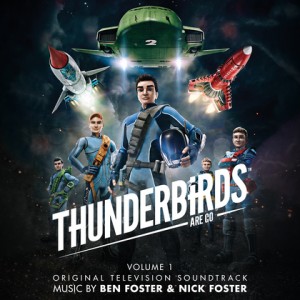 Though the decades of Gerry and Sylvia Anderson’s classic “Supermarionation” shows, the stirring, grandly thematic voice of Barry Gray made audiences believe that a puppet could fly – no more so then when piloting five spaceships called The Thunderbirds. Now spiffed up with a state-of-the-art mix of modelwork and CGI animation, THE THUNDERBIRDS has taken new flight on English TV, and soon America’s Netflix instant. Old school fans will likely miss the charm of wire-controlled marionettes and Gray’s straight-ahead scoring that nicely combined British patriotic pomp with hep 60’s pop. This reboot is pitched straight ahead for an adrenalized tween video game generation, with a scoring approach by brothers Ben Foster (TORCHWOOD) and Nick Foster (ROCKET ISLAND) that manages to pack about twenty musical ideas into cues where Gray might fit one or two.

But if his symphonic-pop approach seems positively slow in an future of ADD kid’s entertainment, the Foster’s definitely pay tribute the big screen musical spirit of what Gray set out to achieve in stirringly heroic, form. Ben Foster’s work with Murray Gold on giving a certain Time Lord a thrilling orchestral approach pays off nicely for listeners willing to listen to these Thunderbirds as their own musical animals. Just as effective as its fuel of strings and percussive sampling is THE THUNDERBIRDS playful retro approach, with the Fosters bringing a sense of world-travelling fun to their music, including John Barry-esque jazz spy adventure, sand-swept Maurice Jarre exotica, sultry rhythm for Lady Penelope and Daft Punk-ish rhythm. Driven by a strong, trumpeting theme, the Fosters THUNDERBIRDS aim to please with an enthusiasm that proves surprisingly catchy, especially given the way its highlights from Season 1 breathlessly spill from one cue to the next over the 57 tracks on Silva Screen’s nicely packaged CD, throwing its kitchen rocketship sink of styles at the listener with the assurance that something will catch. These aren’t your grandad’s musical Thunderbirds to be sure. But the symphonic uplift at bringing a movie score quality to these spaceships is nicely on deck, and certainly no cooler than when the Fosters gives a tip of the hat to a classic Gray Thunderbirds March that definitely needs no strings attached.

Click on the link to buy THUNDERBIRDS ARE GO soundtrack