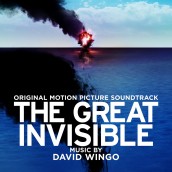 Ry Cooder’s ethereal scores merged country-folk guitar with blues rhythms, harmonica joining with rural percussion and eerie atmospheres of synths and metal to create such enticingly regional scores as SOUTHERN COMFORT, THE LONG RIDERS and PARIS, TEXAS – a landmark, often Tex-Med groove that has since been exceptionally taken up by David Wingo in such transfixing Southern Gothic scores asMUD and JOE. While Wingo has put his own melodic stamp on characters inhabiting the deep woods, the composer now chronicles the real deal as he plays one of the most catastrophic events to hit the Gulf of Mexico in the acclaimed documentary THE GREAT INVISIBLE. Here Wingo’s rhythmic, ethereal talent for musical regionalism soaks over the 2010 explosion of the Deepwater Horizon rig, which took eleven lives and created the worst oil spill in U.S. history.

With a duplicitous industry of course taking an “I didn’t know stance,” Wingo’s music is left to chronicle the clinging psychological, and physical wake of the disaster on both the surviving workers and the economically devastated residents, a task which he approaches with both authentic empathy, and chilling atmosphere that also calls into play his disturbing, apocalyptic grooves for TAKE SHELTER, THE GREAT INVISIBLE  is all the more effective in accenting a real end of many peoples’ worlds as echoing guitar, poignant harmonica, rhythmic electronics and clanging percussion plays a massive construct perched above an unknowable ocean, the score gradually building a transfixing sense of menace that’s destined to blow – all with a keen feel for his earnest, southern-accented subjects. Wingo’s “Great Invisible” might be a mournful wake to the hubris of big oil and its little people victims, but it’s a score that’s always engaging in a way that’s both authentic and experimental, as hypnotic, elegiac melodies plunge into an industry’s oil-pitched blackness and its sad, still-sticking aftereffects on humanity and the environment.

Click on the link to Purchase THE GREAT INVISIBLE soundtrack