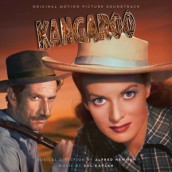 Definitely the silliest title to grace a beyond-manly score, 1952’s KANGAROO was the first Hollywood film to be shot down under, even if its plot of two swindlers after an old coot’s money was a western that could have just as well taken place in Texas (of course minus a few shots of said creatures). Creating a massive orchestral soundtrack that was certainly as big as that state, not to mention a continent, was Sol Kaplan. Best known for his memorably shrill, epically dangerous music for the great STAR TREK episode “The Doomsday Machine,” Kaplan was an especially adventures composer in the early 50s with such oaters as RED SKIES OF MONTANA, RETURN OF THE TEXAN and RAWHIDE, all of which put him in good blockbuster stead to accompany ne’er do-wells Richard Boone and Peter Lawford as they fight over Maureen O’Hara.

The great thing about golden age scores of this sort was how completely uninhibited they were in virtually playing through the entire film, wearing their drama and lilting violin romance directly on their sleeves. KANGAROO‘s smashing action, quivering suspense and overall brooding atmosphere is up there with the most boisterous of the lot, with Kaplan’s especially dark opening recalling the work of Bernard Herrmann. Things do lighten up a tad with quotes of English-Irish Irish folks songs before returning to the struggle of men trying to tame the outback, with the dynamic 12-minute cue “The Dry Land” an especially dramatic piece in brassily conveying the physical, and emotional struggle that was the Hollywood homesteader experience. And when it comes to cues that buck like a bronco, the relentless, furious rhythms of “The Stampede” threaten to throw the listener out of their seat.

One can hear the presence of music director Alfred Newman in Kaplan’s massive, and always melodic score, which serves as a thrilling discovery in the pantheon of classic Hollywood scores whose power bowed down to no man. Having done exceptional jobs releasing such classically robust scores as Dmitri Tiomkin’s CHAMPION and Franz Waxman’s SUNSET BOULEVARD, Counterpoint Records does another smashing job with a soundtrack from the era in making the music play with minimal “archival” age, chronicling its story in an exceptionally well-designed booklet, whose honestly engaging liners by James Doherty take a look at KANGAROO‘s trouble-fraught production that goes beyond its unfortunate choice of a name for a score that comes roaring at the listener like a brahma bull.

Click on the link to Purchase the KANGAROO: THE AUSTRALIAN STORY soundtrack