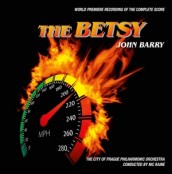 John Barry could give even the trashiest movies a sense of rose-smelling class, especially when the pot was boiling over with a stew of upper class behavior involving the usual assortment of sex, murder and business chicanery – as centering around a clean-burning car engine called THE BETSY of all names. Such was the title that author Harold Robbins bestowed to this fun, Mr. Skin-worthy cinematic adaptation of his critically ta-ta’d brand of wealthily randy literature. Sure Barry might have been given a bit of cheese to work with in1978 between this, STARCRASH and GAME OF DEATH. But the big difference was THE BETSY‘s air of high class, resulting in a score of true, richly melodic elegance that those unacquainted with the material might mistake for music dedicated to the noble, nostalgic captains of industry. No composer could use themes to drive scores like Barry, and THE BETSY is as usually resplendent with them.

Veering from busy, sometimes waltzing rhythms that signal the assembly of cars to eerie, “electronically”-accented suspense, aching violin tragedy and swooning romantic melodies for the abundant bedroom hopping, THE BETSY shines as one of John Barry’s most impossibly lush scores in a repertoire full of them. One wonders why it’s taken so long to get this model soundtrack out of the cobwebbed assembly line of seemingly lost scores. But leave it to Barry specialists James Fitzpatrick and conductor Nic Raine to follow up their release of the Barry obscurity MISTER MOSES with another great performance by the City of Prague Philharmonic Orchestra. Sure they’ve rebuilt the model, but this Barry BETSY drives like a champ, even if it was always attached to an Edsel.

Click on the link to Purchase THE BETSY soundtrack