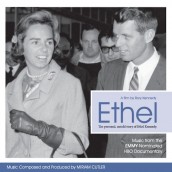 Miriam Cutler documents the indomitable spirit of an unsung Kennedy

Having started off with some fairly wacky narrative films like STREETS OF RAGE and way more artistic indie efforts like AMY’S ORGASM, Miriam Cutler has essentially become one of the queens of documentary scoring to the rhythmic tunes of LOST IN LA MANCHA, ONE LUCKY ELEPHANT and the Emmy-nominated THE DESERT OF FORBIDDEN ART. Yet with so many works, Cutler remains truthfully under-represented on CD, a fact that Perseverance’s release of her score for the Emmy-nominated HBO documentary ETHEL does a charming, and ultimately moving bit to remedy. Reteaming with GHOSTS OF ABU GHARIB director Rory Kennedy for a very personal look at the filmmaker’s mom, ETHEL talks about the life of the woman whose marriage to Robert Kennedy was tragically cut short. Yet this matriarch from America’s most famous political family is someone who looks on the brighter side of life, an uplifting attitude that Cutler embodies with a playful, pizzicato-friendly rhythmic approach.

It’s energetic music that’s full of likeable, peppy warmth, as well as far more poignant moments for string and guitar. Cutler follows the subject like a friendly reporter, spreading thematic sympathy, as well as subtly capturing the Washington environs of her husband, as well as nicely playing Latin music for Robert’s meeting with Caesar Chavez. Tragedy is also reflected with the same, understanding subtlety for a sympathetic orchestra, playing the poignant irony of a director who never got to meet her father. Cutler’s approach has a folksy quality to it as well that’s relatable in much the same pleasant way that Ethel Kennedy was to the many people who grew to realize that she played no small contribution to her husband’s legacy, even if she wasn’t in the spotlight. It’s a vibe that’s no less moving for the gentle, upbeat understanding that Cutler brings to the documentary genre, and this subject in particular.
AGREE? DISAGREE? LET YOUR VOICE BE HEARD – COMMENT BELOW

Click on the link to Purchase the ETHEL soundtrack