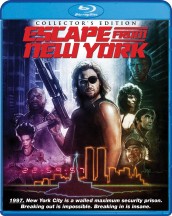 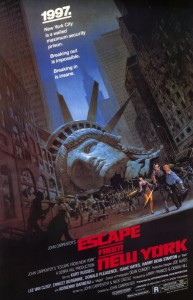 As most of John Carpenter’s film output has been getting its just deserved Blu-ray remastered treatment over the last couple of years, one of the long-awaited hold-outs has been ESCAPE FROM NEW YORK. This 1981 gem is an action picture opus on a shoestring presenting for the first time one of the most underrated action icons from the 1980s – Snake Plisskin (played with apathetic glee by Kurt Russell).

While ESCAPE followed Carpenter’s breakthrough as a horror director with HALLOWEEN and THE FOG, ESCAPE hearkens back to his 1976 modern day action western ASSAULT ON PRECINCT 13. There’s more action and western-esque posturing with ESCAPE with its economical  storytelling and it remains vibrant with creativity and originality that still holds up quite well.

The story set in 1997 and sees New York being walled up and becoming a maximum security prison. When the President’s (Donald Pleasence) plane that was flying over New York is shot down, criminal Snake Plisskin is offered a plea bargain. If he enters that gang-filled no-man’s land to pull the President out alive, all his past crimes will be forgiven.

Along the way, the film features a who’s who of supporting players including great turns by Ernest Borgnine as a cab driver, Isaac Hayes as the Duke of New York, Harry Dean Stanton as a former colleague of Plisskin who double crossed him and Adrienne Barbeau as a kick-ass femme fatale. Toss in Lee Van Cleef as the New York Police Commissioner and Carpenter repertory player Tom Atkins as Cleef’s right hand man and you have one helluva cast guiding the ship.

What makes the film work so well, in lieu of large-scale action set pieces, is the creativity in which Carpenter makes you believe more is going on than actually is. The production design is impressive with Illinois subbing for New York, amazing visual effects work by a then unknown James Cameron (credited as Jim), stunning, widescreen cinematography by Dean Cundey and of course Carpenter’s propulsive elecontronic score he composed in association with Alan Howarth.

It’s been some time since I’ve watched ESCAPE FROM NEW YORK, and it’s even better than I remembered – partly because the Blu-ray remaster is crystal clear. Since most of the film takes place at night, previous versions on VHS and DVD were quite muddy. This new remaster looks fresh and sharp.

Even though Carpenter would revisit the Snake Plisskin character with 1996’s ESCAPE FROM L.A., that follow-up veered too far into camp and satire, losing some of the gritty bite of the original. While I am wholly against many remakes, I’m actually at peace with the notion of an ESCAPE remake if it’s done right and with the tone and spirit of the original. And yes, if they can find someone as great as Russell to take over the mantle, I might be okay with that as well.

As is par for the course with Shout! Factory’s Collector’s Edition releases, this one is loaded, featuring two discs. Disc One has the movie, new commentary with Barbeau and Cundey, archive commentary with Russell and John Carpenter and another with producer designer Joe Alves and producer Debra Hill.

Disc two includes just about everything else you could hope for. There’’s a new visual effects featurette looking at the groundbreaking work on this film, a new interview with still photographer Kim Gottlieb-Walker and archive featurettes including the original opening bank robbery sequence that was cut from the film (it’s actually pretty impressive, though you can see how it would slow down the film’s pacing), a featurette on the making of the film, theatrical trailers, photo galleries and more goodies.

It’s a shame Snake didn’t have more adventures, but it’s great to have a pristine version of the film to enjoy once again.