It’s been a long time, but the boys are back with a funny and biting new episode 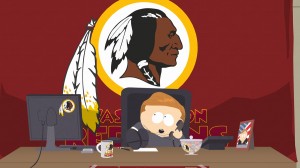 It’s been a very long wait, but SOUTH PARK is back for Season 18 and boy were Trey Parker and Matt Stone sorely needed.

Their wit and knack for social satire is hard to live without for almost a full year (the series used get be split into two-seven episode seasons – one in the Spring, one in the Fall), but now it’s all in one big chunk and only ten episodes.

However, when they hit it out of the so-called “park” with something like “Go Fund Yourself,” it’s well worth the wait.

Much has happened since SOUTH PARK provided their epic three-part story “Black Friday” last year and satire clearly has been burning a hole through Parker and Stone as they skewer many topical targets with their return.

Number one on the list is the notion of “start-ups” – companies that literally do nothing yet are sold for billions of dollars. Cartman, Stan, Kyle, Kenny and Butters decide that they’re going to start their own company, do nothing, make money and never go to school again.

How will the fund it? Through Kickstarter of course.

After coming up with some vulgar names for their company, they discover that football team The Washington Redskins lost their trademark, so the name is fair game and call their start-up The Washington Redskins. Of course, the actual team is upset with Cartman using their name and it results in a tug of war between the two entities.

The episode hits so many satirical targets and do it so well, it’s refreshing to see them be so on target so out of the gate. There’s a little bit of everything including domestic violence controversy issue that’s been plaguing the NFL, NFL Commissioner Roger Goodell’s bizarre press conference, Apple announcement events, Indian stereotypes, Kickstarter taking people’s money for doing money and more.

The show hits a particularly hilarious apex when the Washington Redskins football team goes into Kickstarter and kills everyone, followed by defeat when they’re playing the Dallas Cowboys and realize what they did was wrong and walk away from the game.

Cowboys vs. Indians! Get it?

SOUTH PARK, like any satirical series, can be a bit hit and miss, but it’s always a great sign when the season gets off to a great start. Maybe the long wait in between seasons is a good thing since it allows Parker and Stone to fully recharge their batteries.

Whatever the case, “Go Fund Yourself” is a fantastic season debut and fingers crossed that it bodes well for the remaining nine episodes of Season 18.