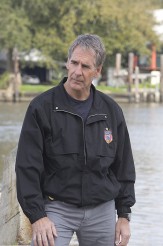 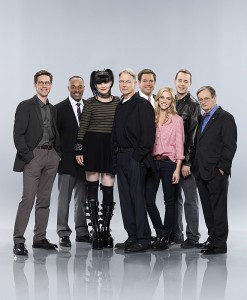 Glasberg guided NCIS through a potentially rocky patch in Season 11, when longtime regular Cote de Pablo, who played Ziva David, abruptly left the show. Additionally, Ralph Waite, who played Jackson Gibbs, the father of lead Mark Harmon’s Leroy Gibbs, passed away in real life, something that had to be dealt with on the series.

Viewers originally met the NCIS: NEW ORLEANS team – headed up by Scott Bakula as Special Agent Dwayne Pride – on a two-part Season 11 NCIS episode last season. Much of NCIS: NO is shot on location, which means Glasberg is supervising series on two different coasts.

At a party thrown by CBS for the press, Glasberg talks about his various executive producer/show runner duties.

ASSIGNMENT X: How did it come about that you all decided, “Let there be a third NCIS series”?

GARY GLASBERG: It honestly didn’t unfold that way. Every summer, I do some research about storylines for the coming season [of NCIS], and I sat down with Mark Harmon [in 2013] and I said, “Hey, I found out that there’s an office in New Orleans, and it used to be run by one guy, and it was a very tiny little office, and it was quirky and eccentric, against this great backdrop.” And he said, “Gary, that’s not a sweeps episode, that’s a spin-off.” And we pitched it.

GLASBERG: No, it wasn’t like that at all. He and I, we work very closely together. This is an opportunity to do something that we both felt passionate about, and it came together nicely.

AX: Are you having to go back and forth now between Los Angeles, where NCIS is made, and New Orleans to keep track of both shows?

GLASBERG: No, no. We film down there, but I’ve put a whole great group of writers together – a guy named Jeff Lieber is [co-show runner on] NEW ORLEANS with me – and the two of us will periodically go down, but we’ll take advantage of technology and video-conferencing and make it work.

AX: Do you have a separate producer on the ground in New Orleans?

GLASBERG: There will be multiple producers on the ground there, and then each writer, with their episode, will visit New Orleans as well.

AX: Was this past season of NCIS the most difficult to deal with in terms of having to deal with abrupt and unforeseen changes?

GLASBERG: It was certainly challenging in that, you enter Season 11 and you expect things to go very smoothly. And then suddenly there are surprises and bumps in the road, and you embrace them as best you can and you make it work.

AX: Back in Season 9, you ended the year with a major cliffhanger, with almost all of the main NCIS characters in mortal jeopardy. Because a lot of people’s contracts were coming up, there was some speculation that you might actually blow up a character.

GLASBERG: You know what? The interesting thing was, and people are going to have trouble with this, but there was no connection between the contract negotiation and my decision to do this storyline. This storyline was something that I had landed on a long time ago. It never really came to that. I’m lucky to have the fantastic cast that I have.

AX: Season 11 did not end on a cliffhanger. Was that because you and/or CBS didn’t want both NCIS and NCIS: L.A. to end on cliffhangers in the same month?

GLASBERG: No, no, it doesn’t have anything to do with that. We just felt that there had been so many twists and turns and surprises with Ziva’s departure and the introduction of the NEW ORLEANS group and all the things that happened in Season 11, we just decided, “You know what? We had a true event that happened in Ralph Waite’s passing, and let’s treat that properly and do it justice.” And that was how we felt like we should end the season [by memorializing Jackson Gibbs in the season finale].

AX: Is Jackson’s death going to have any lingering effect on Gibbs going forward?

GLASBERG: I think so. He lost his father. And it will resonate absolutely into Season 12. We ended the episode with him looking at the model boat that he had built for his mom and named after his mom and now he’s going to start building it in his basement. So I think that’ll be a part of how he deals with the process.

AX: Now, in addition to Gibbs dealing with his father’s death in the season finale, you also wrapped up two long-running plotlines from previous seasons. There was the end of the terrorist group …

GLASBERG: That’s true. We set that up at the beginning of Season 11, and then we followed it through and paid it off at the end of the season.

AX: And also the cartel storyline, which began in an earlier season …

GLASBERG: The cartel stuff came from two seasons prior before that.

AX: Are there remaining unresolved plotlines that may get resolved in Season 12?

GLASBERG: One of the beauties of NCIS is that we can take a story that was set up years ago and we can revisit is present-day and no one blinks. So if there’s an opportunity to do that, we absolutely will.

GLASBERG: It’s because we have particularly attentive fans. And it’s a gift, honestly, because it’s wonderful to be able to go back to something that’s set up like that and then make it work now.

AX: Do you think the Internet helps the fandom, which in turn helps the show?

GLASBERG: I do, yeah. It’s amazing how these fans interact and communicate and it’s an opportunity for all the people who love NCIS to find each other, and that’s a great thing.

AX: Do you have something that you’re particularly proud of from Season 11?

AX: Do NCIS and NCIS: L.A. and now NCIS: NEW ORLEANS ever have the problem of finding that the same storyline is happening on more than one show?

GLASBERG: No. There’s a lot of communication that goes on between the shows and we’re very conscious of that and we do our best to make sure that doesn’t happen.

AX: Are the shows similar enough that it might happen if you weren’t communicating?

GLASBERG: We like to dot the Is and cross the Ts and make sure that we don’t get close, and we talk often, and they’re very different shows. At the end of the day, these characters – Gibbs and the rest of the NCIS team – are so embedded in our psyches that it’s a different type of storytelling.

AX: Now, is NCIS: L.A. going to potentially cross over with either mother ship or NOLA?

GLASBERG: I can’t speak for L.A.  That’s Shane Brennan’s show and so the plans for that one aren’t something that I’m privy to, but I certainly can tell you that characters that are in the original show will make appearances in the NEW ORLEANS show as well.

AX: Anything else you’d like to say about NCIS or NCIS: NOLA?

GLASBERG:  I’m just thrilled that we continue to have the interest and support that we do, and we’ll keep moving forward, and making really strong episodes of television. I’m happy to be there, I’m happy to be working with these people. We’re having a great time, and as long as we’re still having fun and coming up with stories that we feel are fresh, then we’ll keep it going as long as we can.