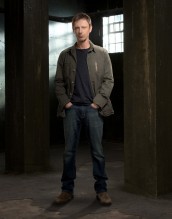 The actor talks his new series for BBC America 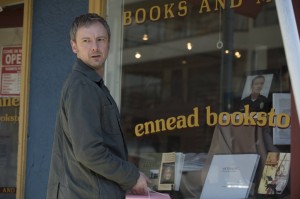 In the new BBC America series INTRUDERS, John Simm plays Jack Whelan, whose wife Amy (Mira Sorvino) begins acting very strangely, then disappears completely. Jack’s search for Amy leads him to some very strange phenomena. The series has been adapted from Michael Marshall Smith’s novel by Glen Morgan (of THE X-FILES and FINAL DESTINATION), who is also the show runner and one of INTRUDERS’ executive producers.

This is Simm’s first job in the U.S. and his first American character. Originally from Yorkshire and raised in Lancashire, he’s a U.K. film and television veteran, with leading roles in the miniseries STATE OF PLAY and LIFE ON MARS, as well as playing Bernard Sumner in the feature 24 HOUR PARTY PEOPLE. Fans of DOCTOR WHO, INTRUDERS’ Saturday night lead-in on BBC America, also know Simm as the Master on that long-lived show.

Simm is present at a rooftop party at West Hollywood’s London Hotel, thrown by BBC America for the Television Critics Association, where he answers a few not-too-intrusive questions about his work on INTRUDERS.

JOHN SIMM: I got involved through [INTRUDERS executive producer] Julie Gardner, who’s a friend of mine who I’d worked with previously on DOCTOR WHO and STATE OF PLAY, and she met and she described the project to me and asked me if I’d be interested in playing Jack, so of course I did, I said yeah.

SIMM: Yeah, yeah. He hasn’t been intruded upon, so he’s kind of normal, as far as normal goes [laughs], but he’s got a very dark past. The reason they are where they are is because they had to escape from L.A. and get out of there. Something terrible happened there and we find out what later on. But the thing that happened helps him deal with what he has to deal with later on.

SIMM: Jack Whelan, ex-LAPD cop who is now an author, and he’s written a novel and he’s trying to follow it up and his wife goes missing and some strange things start happening and he tries to find her and he gets involved with a secret society that is devoted to reincarnation.

AX: Did you read the book INTRUDERS is based on?

SIMM: Yeah. I think the world of the book was great and a lot of it is told through his eyes in the book, so it was really helpful to get an idea about him and how he thinks, so it was invaluable, really. And of course Glen’s scripts were fabulous. I didn’t want to change anything.

AX: Were you an X-FILES fan?

SIMM: I wasn’t a massive fan. I saw a few – I didn’t keep up with it religiously, but I realized how good he was.

AX: Is science-fiction a genre you have an affinity for?

AX: INTRUDERS is set in the American Pacific Northwest. Where is it actually shot?

AX: Is it your first time there?

SIMM: Yeah. I loved it. It was great. I was really busy, so I didn’t see [much of] it. I saw my room and the set. But it was a beautiful city.

AX: Did you have to learn anything that you didn’t know to play the part, like how to handle a gun, or …?

SIMM: No. I knew how to do that. American accent – that was about it. I’d never done it – it was a welcome challenge, it was great. I [got] a voice coach and working on the accent, and hopefully mastering it.

SIMM: I’m doing Season 2 of a series called THE VILLAGE in England at the same time as I was filming this, so I was pretty busy. It was backwards and forwards, five weeks here, five weeks there. For the last six months I’ve been doing it. So we wrapped on that on Friday and I don’t know when that’s out. It’s on BBC 1.

AX: Is the character fairly different from Jack?