lara pulver interview fleming the man who would be bond

©2014 BBC America
Lara Pulver is Ann O'Neill in FLEMING: THE MAN WHO WOULD BE BOND
Interviews

Interview: Lara Pulver chats FLEMING: THE MAN WHO WOULD BE BOND

The actress talks about playing a complicated relationship opposite Dominic Cooper 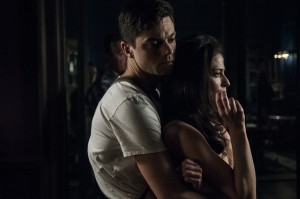 Dominic Cooper is Ian Fleming and Lara Pulver is Ann O'Neill in FLEMING: THE MAN WHO WOULD BE BOND | ©2014 BBC America

Ian Fleming, who famously created James Bond, was in reality a British Naval Intelligence officer during World War II. BBC America is presenting a miniseries, FLEMING: THE MAN WHO WOULD BE BOND, beginning Wednesday January 29, starring Dominic Cooper as the journalist-turned-spy-turned-author.

Fleming’s love life was almost as scandalous as that of his fictional hero. He notably fell in love with Ann O’Neill, who was married to a British nobleman when they met.

Lara Pulver, who made a splash as Irene Adler in SHERLOCK and is on DA VINCI’S DEMONS as Clarice Orsini, plays Ann in FLEMING. She’s present at both the Q&A session and the tea party that BBC America hosts in the garden at the Pasadena Ritz-Carlton for the Television Critics Association. At both, Pulver takes the time to talk about playing the ultimate source for Bond women.

ASSIGNMENT X: Is Ann O’Neill in fact a real person?

LARA PULVER: Yeah. Ann Fleming was the only wife of Ian Fleming.

AX: Are you back on DA VINCI’S DEMONS in Season Two as Clarice, wife of Lorenzo de Medici?

PULVER: Yes. The Medicis are very prominent in second season.

AX: You seem to play a lot of women who tread a circuitous path to what they want and are very good at getting people to do what they want. Between Irene Adler and Clarice and now Ann O’Neill. do you ever want to play somebody who’s kind of helpless and saying, “Oh, my God, what’s going on?”

PULVER: Trust me, Lara Pulver’s very vulnerable as well [laughs]. I think it’s one of those things. When SHERLOCK was such a big hit, there were so many people, when they had strong women in their TV shows, that were like, “Is Lara Pulver available to come and do this for us?” But what I loved about this was actually the writing and the period. I’d never done the 1930s-1940s period. It was just wonderful to step into a woman of that world, where women weren’t as strong as they are today and didn’t have as much say, and yet she was able to do so much and was so ahead of her time.

AX: Did the wardrobe appeal to you as well?

PULVER: What was quite extraordinary and what very much attracted to me to this project was not only the writing, but the amount of filmmakers that had come together to make this TV miniseries. Caroline Harris is our costume designer, who did 42 with Harrison Ford recently, so she’d kind of been engrossed in the 1940s period. And I had thirty hours of costume fittings in total, which is kind of unheard-of. But it’s a testament to her attention to detail and her want to make this something quite iconic. And I think what she’s achieved and accomplished is quite extraordinary. I know Dom [Cooper] was pretty much stuck in a Naval suit for the majority of the show, but Caroline specifically wanted to make my character this very spirited beacon of light throughout the entire show. Hence, we’ve got the background of the eve of the war, and Ann in true style, with her family motto being, “It’s no longer fashionable to be dull,” is wearing a canary yellow dress hosting a dinner at the Dorchester. So I think Caroline did a wonderful job of not only hitting the era, but also finding the moments of the characters throughout these episodes, and depicting their journey as well.

We also had an extraordinary cinematographer, Ed Wild, who has just done a beautiful job of making it so cinematic and beautiful. And recently I was singing his praises, having seen this, and what he managed to achieve in that time. He did the Jean-Claude Van Damme commercial, where he’s doing the splits over the Volvos. So he’s like the coolest man in the world now.

AX: Ann and Ian are very attracted to each other and have some fairly risky encounters, but it’s not very graphic …

PULVER: It’s funny, because you don’t see anything, so I’ve never felt uncomfortable.

Before I signed off on this project, I was like, “What are you doing in regards to their bedroom antics?” Because obviously I was very uncomfortable doing all that stuff. And when I knew that [FLEMING director] Mat Whitecross and I were on the same page, and that it was about what we don’t see and it’s actually more about the journey of these two people and their dysfunction and their needs and their wounds, then I knew I would do this.

AX: Some of their behavior toward one another is rather extreme …

PULVER: Yeah, I would agree. But what was so interesting is knowing that it was consensual. She always kind of provoked him to the point of an awakening, I think. They challenged each other so much and then it got to the point where he went, “Right,” and got physical with her, and all of a sudden, something came alive in her. It was almost like this want for love, this want for affection, and then he opened a different door in her, so it was really interesting, the whole journey.

AX: How was it playing those scenes opposite Dominic Cooper?

PULVER: There was a kind of an unspoken trust, I guess. I’ve been so fortunate to work with some wonderful leading men, Dom being one of them. We didn’t have a chemistry test read before we did the job. We met at the table read, and there was an instant respect and trust of each having each other’s backs, which is so vital when you’re depicting two very volatile people such as these are, where really what you’re wanting to display and explore is their extremes. So you’re wanting to feel them at their most vulnerable and exploit them at their most aggressive. And these two people were so dysfunctional and really pushed each other’s buttons in such a way that there had to be that kind of safety net where, hopefully, Dom felt like I always had his back and vice-versa, which meant that we could do one take of a scene and I could be in absolute tears and need him to physically support me, and in the next take, a whisky glass was being thrown at his head and he was having to duck. Fortunately, he’s agile enough. You have to be very present, and that’s a gift of working with a very talented actor who has come from stage and screen such as Dom.

AX: Does FLEMING take us through Fleming’s success with the Bond novels, or does it end before that?

PULVER: We end on our honeymoon in Goldeneye, where he’s just written his very first novel, Casino Royale.

AX: Is there anything else you’d like us to know about FLEMING?

Article Source: Assignment X
Article: Interview with Lara Pulver on FLEMING: THE MAN WHO WOULD BE BOND