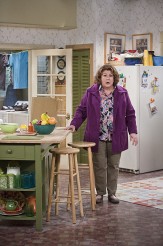 Interview: THE MILLERS’ Margo Martindale chats about her hit series

The actress also talks working on THE AMERICANS 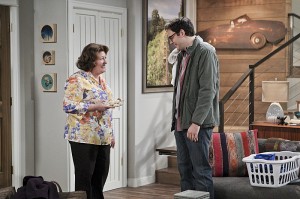 Margo Martindale very rightly won a Supporting Actress Emmy for her indelible portrayal of backwoods crime queen Mags Bennett on JUSTIFIED in that series’ second season. Since then, the prolific Texas-born actress appeared on two short-lived TV shows, CHAOS and A GIFTED MAN, before playing opposite Meryl Streep and Chris Cooper in the feature film AUGUST: OSAGE COUNTY.

In 2013, Martindale took on two television roles that are still ongoing. One is KGB spymaster Claudia, aka Granny, on FX’s THE AMERICANS, which begins its second season Feb. 26. The other is Carol Miller on CBS’s half-hour comedy THE MILLERS, Thursdays at 8:30 PM. In Greg Garcia’s creation, when Carol’s husband Tom, played by Beau Bridges, leaves her after decades of marriage, Carol moves in with their grown son Nathan (Will Arnett), much to his chagrin. Tom, meanwhile, moves in with daughter Debbie (Jayma Mays), her husband Adam (Nelson Franklin) and their teenager Mikayla (Eve Moon). Carol and Tom are both trying to figure out who they are and how the world works now that they’re not together – even though they haven’t entirely cut the cord to each other.

CBS invites the Television Critics Association to be the live audience for a table-read of an episode that finds Carol accompanying Nathan on a Caribbean vacation and loosening up far more than her son expects.

Following the reading, Martindale chats with reporters about her current run of successes.

AX: Were you expecting THE MILLERS to be the kind of breakout hit that it has become?

MARGO MARTINDALE: I was expecting nothing. That’s the way I’ve learned to be in show business.

AX: When did you know that you guys were onto something?

MARTINDALE: You know what? I’ve got to tell you – the chemistry here is so palpable that you know something is right. It’s an incredibly kind and loving group of people. I absolutely love working with them.

AX: When you’re playing Carol, do you channel overpowering mothers you’ve encountered in your own life?

MARTINDALE: You know what? I hit upon something a few weeks ago, that I thought I was like Frasier [the Kelsey Grammer character on FRASIER]. It’s a way that I can twist, because he’s always right [in his own mind], whatever he says. Finding a way to make that work for me is my hardest thing. I’m trying for it all to come together in one person. It’s kind of a psycho thing I’m trying to do for my own self as an actress.

AX: Which of your coworkers is the hardest to keep a straight face with?

AX: You did laugh at his delivery during the table read …

MARTINDALE: Well, it happens a lot.

AX: Carol loosens up a lot in this episode. Will she continue on this trajectory of mellowing out, or is this an aberration?

MARTINDALE: I think maybe we’ll see – I’d love Carol to mellow into a relationship of some sort.

AX: Is Carol finding herself as a single woman?

MARTINDALE: I think so, yes. I think that at first, I thought – and I don’t know how I feel about it now, but at first, I thought, when are Carol and Tom going to get back together? Because clearly they love each other. But maybe that’s not what this is – maybe this is a show about making families out of families that fit together in a different way, which is kind of unfortunately what most of America is – disjointed but still a family.

AX: Why do you want Carol to get back together with Tom?

MARTINDALE: Oh, because I love Beau [laughs]. And [since their separation, the characters] have slept together a few times. I don’t think I’ve slept with anyone else – I’m about ready to, though.

AX: You’re going back on THE AMERICANS. How did you work that out scheduling-wise with THE MILLERS?

MARTINDALE: I did it on weeks that I was off. And I’m not finished yet.

AX: Are you having psychic whiplash between playing Claudia and Carol?

MARTINDALE: No. It’s so vastly different that it’s very easy to do. Let me just say, they don’t even resemble [each other] in my head. They resemble, I guess, in my looks. But in my head, I don’t look the same, either.