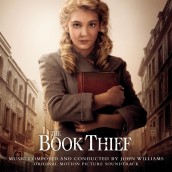 An excellent, “entry” level Holocaust film for mature young viewers, THE BOOK THIEF comes across as a movie you’d think that Steven Spielberg had directed, right down to a beautifully sumptuous, but no less achingly raw score by John Williams. While the filmmaking honors here can actually go to DOWNTOWN ABBEY‘s Brian Percival, Williams’ score is certainly worthy of his accomplishments for said other director, who’s often dealt with the horrors of WW2 in SCHINDLER’S LIST and SAVING PRIVATE RYAN. But if there are any Spielberg movies that THE BOOK THIEF has a kinship with, then it’s the hugely underrated EMPIRE OF THE SUN and THE WAR HORSE, both of which viewed civilian calamities through unknowing kids’ star-crossed imaginations. THE BOOK THIEF  has the even trickier task of capturing the enormity of Germany’s Jewish genocide around the fringes of a bucolic small town where life is mostly beautiful – at least on the outside, as opposed to the cellar that hides the Jewish refugee its young heroine is captivated by.

If there’s one instrument that Williams has used to devastating effect, then it’s certainly the violin in the Hebraic scores to SCHINDLER’S LIST and MUNICH.  What’s interesting, and no less impactful about THE BOOK THIEF is that the solo violin is barely present. Instead, the predominant sound is harp, strings and piano, as mostly heard in a pensive, if not gently happy register reminiscent of Williams’ soundtracks to STANLEY AND IRIS and THE ACCIDENTAL TOURIST – one movie about a writer re-discovering his purpose in life, and the other about a unassuming man learning to read. Both of these stories’ thematic elements are very much a part of THE BOOK THIEF in the lush, orchestral feeling that Williams gives the score, combining both a sense of optimism, and realism for a girl discovering the best, and worst about humanity in her literally sheltered life. Rhythm gently glides amidst the somberness of what lies behind a relatively gilded curtain, an insistence on subtlety that adds up to the kind of devastating impact that only Williams’ unabashedly empathetic, and utterly distinctive style can deliver.

Even though he’s past 80 years old, John Williams remains at the top of the Hollywood game with a sense of melodic freshness and innocence that’s no more resonant in a BOOK THIEF that’s likely to reduce listeners to stealing handkerchiefs. But as always, it’s sweeping emotion that’s honestly earned through dramatic subtlety and gorgeous, heart-rending themes, of which THE BOOK THIEF has volumes. It’s a veritable library of the greatest dramatic film scoring text of the last century, accomplished with no shortage of vitality as Williams continues to enthrall into the next epoch.

Clink on the link to Purchase THE BOOK THIEF soundtrack