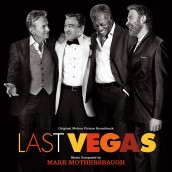 Where he was once known for musical Devo-lution, Mark Mothersbaugh has evolved into one of Hollywood’s most versatile composers, showing a colorful, chameleon-like range from SAFE‘s slam-bang urban action to the cartoon energy of CLOUDY WITH A CHANCEMEATBALLS and RUSHMORE‘s Baroque irony. Now given a trip to the Neon City with a bunch of very much breathing codgers, Mothersbaugh adapts quite nicely to the fender Rhodes organ funk that inflects just about every movie score to feature over-the-hill gangs from STAND UP GUYS  to THE INCREDIBLE BURT WONDERSTONE and any number of “Oceans” sequels. But then again, what better style to capture the retro groove of graying cocks of the walk, or The Strip in this case? LAST VEGAS’ bachelor party puts a jazzily familiar, and very fun spring into their step, conveying the characters’ make-it-or-break-it weekend with both contagious, comedic zing and the nicely melodic schmaltz of strings, guitar and piano that get across the real desperation at hand.

Like the movie, Mothersbaugh’s approach is as obvious as it is likeable, full of nothing but its utter, successful confidence in giving listeners a good time with the tried and true as the guys put wood back into their pencils. But if there’s a straight flush on the table, then it goes to the sparkling voice of Mary Steenburgen, who effortlessly puts sweet cougar sensuality into her role as the singer who captures the crew’s attention, especially with her renditions of such standards as “Cup of Trouble, “I Only Have Eyes For You” and uptempo and sultrily slow versions of “Only You.” It’s Steenburgen’s feminine touch that help makes LAST VEGAS a listen worth re-visiting.

Clink on the link to Purchase the LAST VEGAS soundtrack