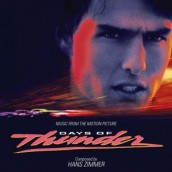 For his first story credit, Tom Cruise had the nifty idea of placing his TOP GUN team into the rock-fueled world of NASCAR, from pedal-to-the-metal mega-producer Jerry Bruckheimer to director Tony Scott. But even if composer Harold Faltermeyer was missing from the below-the-line pit crew, his energetic Krautrock level of synth-groove propulsion would be more than juiced up by another German-to-Hollywood action émigré named Hans Zimmer. Having recently gone from the English arthouse likes of DARK OBSESSION and PAPERHOUSE to LA’s go-to African guy with A WORLD APART and the Cruise-starring RAIN MAN, Zimmer was now making a fast break into the multiplex action with BLACK RAIN. But it’s arguably the rocking score of DAYS OF THUNDER that firmly propelled him to the studio big leagues – and with good reason.

In an era where longhair metal prog-rock scoring took pole position, Zimmer truly showed a talent for creating a great, blazing theme, then laying power-chord metal guitar and the state of the orchestra-synth art to drive his scores. Like the speed freak cousin of DRIVING MISS DAISY, Zimmer revs up the southern-centric rhythms for the NASCAR fan crowd into breathless, rocking momentum (its power chords supplied by no less than Jeff Beck), while also conveying some level of seriousness and reflection to the high stakes sport. If there’s a key to how enjoyable Zimmer’s early efforts are for all of the technical evolution his sound has gone through, then its just how melodic, and plain damn fun his late 80s / early 90s grooves are, no more so than in its pounding, long hair thrashing ten minute “Last Race.”

If Zimmer’s latest, excellent score for the retro car racing drama RUSH is about the U2 groove, than DAYS OF THUNDER stands as the Motley Crue version. Having done a great job with their complete presentation of Zimmer’s BLACK RAIN, La La Land comes in first again with one of the composer’s most unabashedly energetic popcorn scores, even getting in David Covendale’s take on Zimmer’s theme (co-written by Billy Idol) “Last Night of Freedom,” with an extra flag wave for Tim Grieving’s excellent, entertaining liner notes that interview no less than Tom Cruise himself.

Clink on the link to Purchase the DAYS OF THUNDER soundtrack