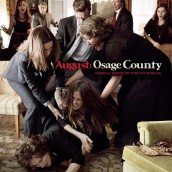 The STEEL MAGNOLIAS formula gets an edge in Tracy Letts’ dysfunctional Oklahoma family fireworks. It’s an explosive all-star duel of acting drawls that gets served up with an unexpectedly subtle throw-down soundtrack, serving up a tasty mix of southern rock tunes and evocative scoring. On the first count, there’s a dreamy mix of guitar and strings to Bon Iver’s “Hinnom, TX,” while an unplugged Kings of Leon strums a longing “Last Mile Home.” John Fullbright delivers the blues-rock of “Gawd Above,” while JD & The Straight Shot’s gentle “Violet’s Song” evokes the defiant family ties that bind. Even Sherlock Holmes (i.e. Benedict Cumberbatch) showing his winsome vocal talents to lonely organ backing on “Can’t Keep It Inside.” Classic southern rock is also on hand with Eric Clapton’s “Lay Down Sally,” while Billy Squier’s chanting guitar-rock of “The Stroke” proves an unexpected throwback pleasure.

As for score, AUGUST OSAGE COUNTY has a beautifully melancholy vibe, at first conjured by Adam Taylor’s longing strings, piano and gentle percussion that evokes the ethereal touch of Thomas Newman. The orchestra takes on a lush quality in the concluding themes of Gustavo Santaolalla, combining his soulful guitar sound with a poetic sense of Americana. Both composers create a resigned, yet hopeful spirit, keeping their barbed emotional to a minimum in a way that nicely contrasts with the sound and fury going on around the music. But as a sole listen, AUGUST OSAGE COUNTY is full a powerfully mellow goodness.

Click on the link to Purchase the AUGUST: OSAGE COUNTY soundtrack