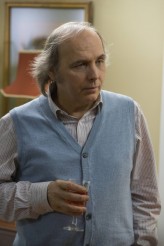 DANCING WITH THE STARS Season 14 Recap: Perfect scores for Menounos an...
Exclusive Interview: Julie Plec vamps on THE ORIGINALS and THE VAMPIRE...
INTRUDERS actor John Simm on the new BBC America series - Exclusive In...
WHAT WE DO IN THE SHADOWS: Natasia Demetriou takes a bite out of new F...