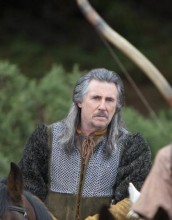 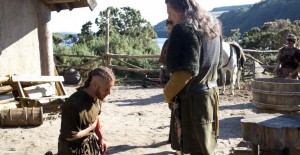 This was an exceptionally brutal episode of VIKINGS.

And when I say that it is actually saying something considering every episode of this show on History has been very brutal. But “Raid” was by all means the fall of the Lothbroks at the hands of the ruthless Earl Haraldson (Gabriel Byrne).

Haraldson has pretty much been dead set on eliminating made a move to eliminate Ragnar Lothbrok (Travis Fimmel) since the Nord decided to sail west to England against his wishes and law. At first, Haraldson found the treasures enough to sedate him, however, the more time passed the more time he knew he had to take him out or risk his own peril has overlord over his domain.

The Earl put him on trial for killing his man in one of the raids to England (in actuality it was Lagthera (Katheryn Winnick) who killed him after he tried to rape her) but that failed when Rollo Lothbrok (Clive Standen) wouldn’t betray his brother – although his real motives were to “protect” Lagthera who he pines for. The Earl then sent a slew of men to kill him and his sailors only to find that they were outmatched in skill.

In “Raid” Haraldson went one step further and took his troops to Ragnar’s village and scorched it from the Earth, killing everyone, everything and burning every house to the ground. As I have said from the start of this series, these are not good people. They kill monks, they kill civilians, they kill each other with wanton abandon.

Ragnar is brutally wounded in the scuffle although he buys enough time for his children, Lagthera and the priest, Altherstan (George Blagden), to escape. Luckily, Ragnar and his family make their way to Floki’s (Gustaf Skarsgard) house and as one of his main allies he allows him to heal. Meanwhile, Rollo is captured by the Earl and tortured in order to flush out Ragnar and end the struggle.

That sets up the next episode where Ragnar and Earl Haraldson face off for control of the tribe.

“Raid” is about as fun as a TV episode can get. Unsettling in watching a bunch of unarmed old men and children get killed and women get brutally assaulted (or worse), it is damn entertaining because it sets up Haraldson as a great villain and one that we as the viewer can’t wait to see taken down. While Ragnar and his allies are not good people either, they are at the very least loyal to one another and the tribe, which is more than what can be said about Haraldson.