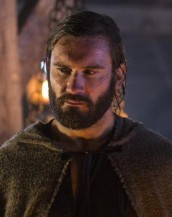 A subdued finale setting the stage for an interesting Season 2 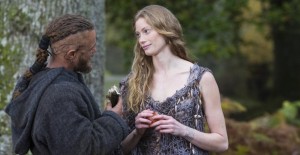 The season finale of VIKINGS was not your typical one, but for a show that has been anything but typical from the start that really shouldn’t surprise anyone.

“All Change” was not a knockdown, drag out battle between warring factions of Scandinavia but was more of a stage setting for what was to come – which will surely be a knockdown, drag out battle between warring Nordic factions. The cool thing about this episode was it showed that not only is Ragnar Lothbrok (Travis Fimmel) a poor negotiator – really bringing nothing but what King Horik of Denmark demanded of Jarl Borg of Sweden – but also that Ragnar is vulnerable to the passions of beautiful women despite loving his wife Lagthera (Katheryn Winnick). In this, it showed that he much like his fellow Vikings that have the taste for fine women and drink, Ragnar too is not unlike them (which up until this point we have been lead to believe).

But the more important storyline centered around Rollo Lothbrok (Clive Standen), Ragnar’s brother, who swayed by the talk of Jarl Borg decided at the end of the episode to go to war against not just King Horik but his brother as well. Given all that we have seen with Rollo – his lust for Lagthera, his constant differing of opinion with his brother and his downright jealousy of Ragnar becoming Earl – this isn’t a surprise. However, we have seen in prior episodes that Rollo when presented with an opportunity to go against his brother has stood by his side. Will this happen this time? We will have to wait until next year when the show returns. But this wouldn’t be a shock given how much Rollo desires all that Ragnar has.

This was a very subdued episode and season finale. In a show that has presented us with a group that is less than good people, you’d expect it to be a blowout fight. But surprisingly what we got worked. The bits with Rollo slowly turning to Jarl Borg as his ally were well done and Ragnar’s lust for a beautiful woman in a strange place showed that maybe Ragnar is letting his fame go to his head instead of focusing on the task.

This probably would have really been the case had he been back in his village where a plague swept through the people killing not only Ragnar’s daughter but the daughter of the former Earl, Siggy (Jessalyn Gilsig), as well.

One thing that VIKINGS had above all during its first season was consistency and I think that goes to the fact that each of the episodes were written by one man, Michael Hirst. This is an anomaly on TV where one dude does all the writing for an entire series. I’m sure he had helpers but the fact that he oversaw much of what was being done helped the series in terms of just delivering quality each and every week. I wish more shows would take this approach as I think it would benefit the overall product.

What a very good first season to a unique show that has become very popular on cable and hopefully will continue to produce fine drama in the years to come.