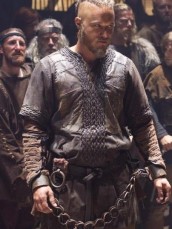 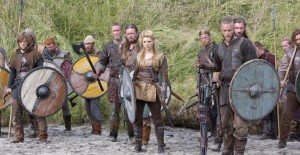 Building on the theme that was established in the first raid out west in VIKINGS, “Trial” showed that these bearded band of bad asses are definitely not good people.

Picking up after the previous episodes were Ragnar Lothbrok (Travis Fimmel) and his Viking sailors made land once again on England and dispatched the local sheriff and soldiers. They pressed on to the neighboring village and Ragnar, brushing up on his English history from what he learned from Athelstan (George Blagden) waited until the entire town was in church before attacking. Leaving the entire village at the mercy of these brutes they easily took all the treasures without any trouble at all.

Things didn’t go as smoothly when they returned to the beach when an entire legion of soldiers from the king had killed the two men left to guard the ship and waited for the Vikings to return from their plundering. Vastly outnumbered the Englishmen didn’t stand a chance as the more seasoned warriors held all the tricks to battle (even pulling out maneuvers seen mostly in Roman soldiers). Once the battle was finished the priest that had led them to the village was dispatched as well, not even helping them get to the treasures they desired was enough to save his life. Again, these are not good people.

But “Trial” was mostly about what happened after Ragnar and crew returned to their territory and Ragnar took the fall for killing Earl Haraldson’s (Gabriel Byrne) agent sent on the boat to uncover the secret to sailing west and to make sure Ragnar didn’t hold back on any treasures. Of course, we know that it was actually Lagertha (Katheryn Winnick) who killed the agent when he tried to rape her during the raid.

Trying his best to corrupt the already corruptible brother of Ragnar, Rollo (Clive Standen), the Earl offers his daughter in marriage as payment for going against Ragnar during the trial. But Rollo stands with his brother and backs up the story.

Meanwhile, Athelstan struggles with his place in the world now that he is the slave of Ragnar. While being a slave has its benefits – including a possible threeway with Lagertha – and he is strangely attracted to the ways of the Vikings even if he doesn’t believe in their gods or their brutal ways. Yet, Athelstan is finding a place among Ragnar’s family and because he sees this as the only way of surviving his ordeal wants to help out as much as possible – leading to what may be some difficult decisions coming up.

Things look to be coming to a head between Ragnar and the Earl in the coming episode as the two obviously cannot co-exist with differing opinions about pretty much everything. All and all this series continues to be among the best television going right now.