The series goes out with a bang skewering Kim Kardashian, Kanye West and more 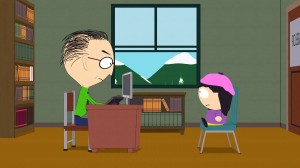 After the three-park SOUTH PARK epic that took on Black Friday, GAME OF THRONES and the videogame console wars between PS4 and XBOX ONE, the series gets back to basics with a great season finale “The Hobbit.”

When SOUTH PARK does satire right, it’s dead on and this episode tackles the poor role models young girls have from the likes of heavily Photoshopped celebrities like Kim Kardashian.

It all starts when cheerleader Wendy tries to give heavy-set and ugly Lisa Berger a pep talk about her low self-esteem. She recommends she ask Butters out, who rebukes her because he feels she’s too “fat.”

This upsets Lisa, especially when Butters talks about Kim Kardashian being perfection. So Wendy shows her, by using Photoshop, how Kim Kardashian does it. It’s all faked and to prove the point, she Photoshops Lisa to look beautiful. This turns into a big deal at school, because all the boys see Lisa in a different light, even though it’s not what she looks like.

This trend extends beyond Lisa, but to the other cheerleaders, as Wendy is horrified what Photoshop and its like has wrought, while she’s frequently called a Hater for trying to expose how skewed our image conscious society is.

Meanwhile, SOUTH PARK continually gets a visit from Kardashian’s beau Kanye West who tries to prove that Kardashian is not a “hobbit” because of a remark Wendy said.

The whole “hobbit” business is hilarious and some of the funniest bits on the show all season. Kanye is clearly in denial, and the truth, that Kim Kardashian really is a Hobbit, and heavily Photoshopped, comes to the fore.

After the sprawling “Black Friday” epic, it’s refreshing to see creators Trey Parker and Matt Stone effortlessly glide through this episode without a mis-step. It’s an excellent conclusion to the new norm of one ten episode season (versus two 7 episode chunks they normally did).

While there are still the occasional clunker episodes, which is standard for the show, the fact they can still hit something so out of the park, like they do with “The Hobbit”, is the reason the series remains one of the consistently best animated series currently on TV.