Home » I The Jury Soundtrack Review 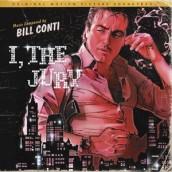 CD Review: I, THE JURY soundtrack

If authors Dashiell Hammett and Raymond Chandler gave their investigators Sam Spade and Philip Marlowe some small amount of hard-bitten class, Mickey Spillane was all about putting the dick into his private with the beyond hard-broiled investigator Mike Hammer. While he’d prove his barely ironic name in such envelop-pushing film iterations as KISS ME DEADLY and the Spillane-starring GIRL HUNTERS, none caught the character’s sleazy magnetism like 1982s I, THE JURY. As written by exploitation maestro Larry Cohen (HELL UP IN HARLEM) and played with five o’clock shadow cockiness by Armand Assante, the hyper-violent, sexed-up JURY was a soupcon of everything that was great about the un-PC 80s, namely orgies, serial killers and heroes who didn’t give a crap about body counts.

Sure Bill Conti had gotten Oscar-nominated attention for scoring action heroes ranging from the noble Rocky Balboa to the debonair James Bond. But it was the chance to rock and roll in NYC’s criminal underbelly with Hammer that unleashed one of Conti’s most aggressively energetic scores, taking detective jazz to new heights of film noir surliness. Driven by a breathless powerhouse theme that’s all rapid-fire percussion, heroic strings and swaggering brass, I, THE JURY throttles along with a punchy, pop exuberance. A sax sets the smoky ambiance, while gnarled synths and twisted, shivering violins bringing in the horror elements of a slasher with a thing for blondes and belief – the killer’s government-sponsored roots enhanced with military percussion. At it’s best in cues like ‘Rummy Run,” Conti isn’t so much scoring the film as having a barely-in-control nightclub jam session, with the accompaniment of a swinging orchestra. Conti’s like Count Basie with a an attitude, his brass section aimed to kill in a classic pulp fiction jungle with a terrifically energetic score that revels in JURY‘s hard R-rated glory.

The Velda to Conti’s Hammer here is Michael Lang, a session pianist and keyboard player whose work has distinguished scores from THE POSEIDON ADVENTURE to THE RUSSIA HOUSE and OBLIVION. But in my book, it’s I, THE JURY that stands out as his most furiously memorable workout. At Lang’s fingertips, the piano is classically elegant in the rendering of Chopin, or Conti’s memorable love theme – which dispenses with sensuality as a hard-on jazz orchestra ravages Barbara Carrera to new heights of pleasure, the afterglow piano the equivalent of a cigarette. And when it comes to keeping time with Hammer, Lang’s chops are virtuoso magic as he for the “Concrete Chase Conclusion.” It says something for Mike Lang’s contribution that La La Land’s special edition ends up with the applause for Lang’s virtuoso playing in a score where the piano is the classy, smoking weapon of choice.

Clink on the link to Purchase the I, THE JURY soundtrack

Article Source: Assignment X
Article: CD Review of the I, THE JURY soundtrack