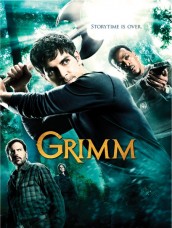 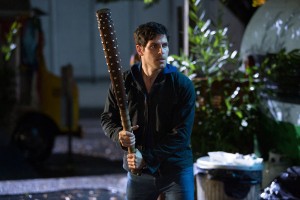 With GRIMM getting ready to head into the second half of Season Two, the cast and executive producers made an appearance at the Winter 2013 TCAs for NBC and spoke about what to expect with the season’s remaining episodes.

The biggest blow-out is a showdown between cop Nick Burkhardt (David Giuntoli) and Captain Sean Renard (Sasha Roiz) with Nick discovering his Captain is part of the larger Wesen conspiracy and also deeply in love with his girlfriend Juliet (Bitsie Tulloch), albeit due to a spell.

“There’s a big, angry kerfuffle and we come to blows,” says Giuntoli. “He has a bit of a height advantage on me, and I have a bit of rage advantage on him.”

“It depends on what service Nick can provide Renard as to whether have him as an ally or an enemy,” says Greenwalt.

Also, the series will be looking at the bigger picture of how Wesen are a part of the world at large and not just the small microcosm of Portland, Oregon.

“We’re going to look at the macro level of what’s going on in the rest of the world and seeking ways to explain it,” says Greenwalt.

GRIMM returns to NBC on March 8.

Article Source: Assignment X
Article: The Scoop on the rest of GRIMM – Season 2