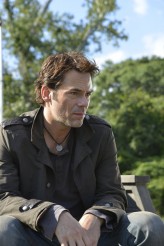 The series returns to NBC in March 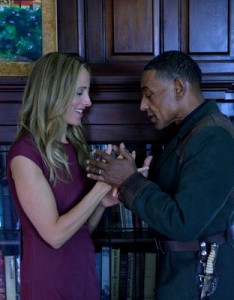 At NBC’s Winter 2013 TCA session today for their hit new action-drama series REVOLUTION, the cast and executive producers revealed what to expect during the second half of Season 1 when it returns in March.

Here was what was revealed …

The show will pick up the pace with  more revelations according to creator Eric Kripke.

“I felt we could have picked up the pace of the stunning revelations,” says Kripke. “Maybe the pace of the shocking surprises were a bit too slow in the first half, if I was being hard on myself. We have a second half that is bigger, better and more exciting and with more revelations, while at the same time maintaining the format.”

With the success of the show, Kripke also has mapped out a loose outline of future seasons.

“Season 1 is mapped out and we’re working towards that right now and we know what we want Season 2 and Season 3 to be,” says Kripke. “They’re only cocktail napkin sketches, because you need to surprised by writers and actors to give yourself enough breathing room so you can veer left and veer right. It’s such an expansive world, there’s no end of stories we could tell.”

The second half of Season 1 also picks up directly where the last original episode left off.

“I can tell you that with Monroe (David Lyons), we don’t take away that card as the cliffhanger,” says Kripke. “He does have choppers and a limited form of power. For me, it really helps making him an unstoppable force that our heroes are totally outmanned and overwhelmed as they’re trying to battle against him. We play that out and we start to deliver officially on the promise of the title – the revolution really starts and begins. The story becomes, ‘can this family, some related by blood and some related by loyalty, maintain your soul when you’re a warrior?’ The show is about power and mythology and the mystery, so to me the show is about these characters and really trying to find the human heart of them. How can they find each other in darkness? This is THE WALTONS with swords, so we really want to make sure it has an incredible amount of heart.”

Article Source: Assignment X
Article: The Scoop on the rest of REVOLUTION Season 1