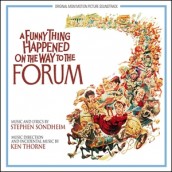 ©2012 Quartet Records
A FUNNY THING HAPPENED ON THE WAY TO THE FORUM (1,000 expanded edition) soundtrack
Reviews

CD Review: A FUNNY THING HAPPENED ON THE WAY TO THE FORUM soundtrack (1,000 expanded edition)

There's comedy tonight in this salute to Sondheim and Thorne

In the annals of musical comedy theater, few productions remain as joyfully historic as 1962’s A FUNNY THING HAPPENED ON THE WAY TO THE FORUM wherein WEST SIDE STORY composer / lyricist Stephen Sondheim and writers Burt Shevelove (“No No Nanette”) and Larry Gelbart (M*A*S*H) drew from the farces of the ancient playwright Plautus for a toga-switching, cross-dressing, door-slamming farce that showed Romans did indeed have a sense of humor when not weren’t staging far-less funny fights in the Coliseum.

Hilariously adapted for the screen in 1966 by Richard Lester, the king of such antic English films as HELP! and THE KNACK, the cinematic forum was wise enough to retain Broadway lead Zero Mostel in the lead role of the wily slave Pseudolus, along with Phil Silvers (originally intended for the role, and later to essay it on stage) and future Broadway Phantom Michael Crawford. Sondheim’s bouncy songs are delights of ribald rhyming that are as hilarious as they are tuneful, no more so than in Mostel’s knowingly expository “Comedy Tonight,” Michael Horden giving the wistful reasons of why “Everybody Ought To Have A Maid,” Leon Greene’s imperious lusting for “My Bride,” and the genuinely “Lovely” duet between Crawford and Annette Andre. But if Quartet’s wonderfully expanded “Forum” is really about paying tribute to the film’s unsung star, then it’s arranger and composer Ken Thorne, who’d win an Oscar for his efforts here.

Having paired with Lester and The Beatles on HELP! (and most of the director’s movies to come), Thorne did what every Broadway-turned-movie adaptation should, namely giving the limited resources of a pit band the soaringly lush melody of a full orchestra, a much harder task than imaginable given that Crawford was the only actor who could actually sing. Not nearly as tune-filled as you might expect for a celluloid show of this sort given Lester’s paring down of the songs to make FORUM more of a movie, the freewheeling styles allowed Thorne to be far more than a slave to Sondheim’s work, not only instrumentally adapting it, but also running with his own energetic score that seamlessly fit into Lester’s crazy-quilt structure. Thorne has jaunty fun employing such Roman-sounding instruments as the Tibia (played by Lester himself), cymbal and the recorder, belting out authentic dances that don’t so much recall Rome as horn-romping Medieval England, as well as a bit hep jazz. But the highlight of Thorne’s work is a chariot chase done with rousing classical rhythm (a la Mozart), until the race turns into a rousing rendition of “Comedy Tonight.” With Randall D. Larson’s excellent liner notes featuring a delightful new interview with Thorne as part of a lavish, picture-filled booklet, Quartet’s FORUM is indeed a worthy tribute to the Caesar known as Sondheim, and his troubadour Thorne.

Click on Link: To Purchase the NOBODY WALKS soundtrack

Article Source: Assignment X
Article: CD Review of A FUNNY THING HAPPENED ON THE WAY TO THE FORUM soundtrack