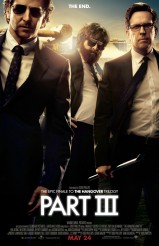 The characters don’t get wasted this time, but we get the resulting headache

Back in 2009, THE HANGOVER – a comedy about a Vegas bachelor party gone astoundingly wrong – was a surprise hit. The movie was actually hysterically funny, because two of the main characters were desperately trying to figure out how they got into such dire straits, and the third had levels of strangeness that were only gradually revealed.

In 2011, THE HANGOVER PART II came out. It had the first film’s general outline, but not its sense of surprise.

Now we get THE HANGOVER PART III. Todd Phillips, who directed the first two installments, directs this one as well, and co-wrote the screenplay with Craig Mazin (the first film was written by Jon Lucas & Scott Moore). All of the main cast is back, including Bradley Cooper as the formerly angry, now just bemused Phil, Ed Helms as the still uptight Stu, Zach Galifianakis as the still disturbed Alan, Justin Bartha as nice-guy Doug and Ken Jeong as crazy criminal Leslie Chow.

As for the plot, it’s decided that Alan needs to go to a rehab facility so that he’ll take his meds. This winds up in a race to catch up with Chow, whose misdeeds have become the problem of our guys.

On the upside, the movie doesn’t do the “we got drugged and can’t remember last night” routine for a third time. On the downside, it seems to have borrowed the plot from an episodic TV show, ramped up the production values and completely forgotten the character nuances that made the first film so engaging. It’s also gotten markedly more mean-spirited. Much of the humor of the original HANGOVER came from the contrast between the characters’ general decency and the insane situations that kept springing up around them. Here, Phil, Stu and Doug are well-intentioned, Alan is childish, Chow is unhinged and it all feels more than a little like “Here we go again,” largely because this is the attitude of most of the characters. Late in the day attempts to create real drama about friendship leavened by jokes don’t really work, and a lot of the punch lines rely on people frequently saying, “What’s wrong with you?” Once or twice is reasonable, but it loses punch as a go-to question after awhile.

There are some nifty action sequences. Cooper deploys low-key but successful charm. Jeong is to be commended as always for his fearlessness – he will go as far as the material demands, and even when the jokes don’t work, his energy is amazing.

Full disclosure: almost everyone has something in movies that really turns them off. For some, it’s extreme gore; for others, anal rape; for yet others, it’s poorly-staged sword fights. For this reviewer, it’s jokes about animal death and animal cruelty. When Alan accidentally decapitates a giraffe two minutes into the film and Phil says a short while later, “So Alan killed a giraffe, who gives a f***?” I was not predisposed to like what followed (which, by the way, includes more animal deaths). This is partly because this wasn’t funny, just appalling, and partly because it shows a) that Alan hasn’t learned anything about empathy from the first two films, and the novelty of his childish self-centeredness has worn off by now. Mostly, though, it’s the idea that a character we’re supposed to like to some extent takes a rare animal, causes it a terrifying and agonizing death and the person in the film who’s supposed to be the most sensible says, “Who cares?” Really?

Reactions to the film will vary. There were laughs at the press screening, though not as frequent as one might hope for in a comedy, but for some, this will be one HANGOVER too many.

LOVE IT? HATE IT? LET US KNOW HOW YOU FEEL – COMMENT BELOW!