Home » save me review series premiere 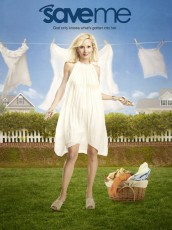 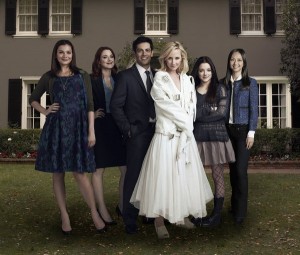 In the last couple of years, NBC has had the bad habit of greenlighting comedies that unfortunately never air as part of the regular season and are unceremoniously burned off in the summer months.

LOVE BITES and FRIENDS WITH BENEFITS were part of this trend and now you can add the high profile Anne Heche starring vehicle SAVE ME to the growing list.

Feeling more like a cable comedy than anything on network TV, SAVE ME follows a disaster of a midwestern wife named Beth (Heche). She drinks, she lies, she steals. She’s so terrible, her husband has to have a mistress named Carly (Alexandra Breckenridge) on the side and strangely she’s okay with it and so is the audience (if only the Mistress were the nice one, maybe that twist could have elevated the series to a whole other weird level). And her daughter Emily (Madison Davenport) is a miserable mini-me – sleeping around with the neighborhood kid among other things.

However, after a drunken bender of a night, Beth eats a big roast beef sandwich and chokes in a truly horrifying and unfunny opening sequence. She awakens the next day refreshed, alive and able to talk to God. God tells her to do things to make her life better for herself, her family and those around her.

Of course none of this is funny, engaging or watchable.

The problem with the show is it tries so hard to be quirky and fun, but the acting, performances and writing doesn’t support it. Heche, unfortunately, just doesn’t bring enough likability to Beth. Even when Beth’s trying to good, Heche seems like she’s trying too hard to pull that aspect of the character off.

The other problem is where does this show go? After watching the “Pilot” and the second episode, it’s still unclear how the series can sustain itself. The show also makes all of the characters unlikable and all the women characters are shrill, mean and unwatchable.

Tonally, the comedy is scarce and the show tries to toss in big moments like Beth and God sending a lightening bolt through Carly and putting her in a coma by the second episode. Huh? I can understand not liking the mistress, but almost killing her?

These are not the things that make for a long-running and successful sitcom.

Created by novelist John Scott Shepherd, this feels like a concept that would have worked better on a page, where you could get more nuance and have time to develop something in a more leisurely and quirky way. You could be sucked into Beth’s world and understand her POV instead of cramming so much stuff in the first half hour of television that you really just don’t care.

SAVE ME is awful. And sadly, NBC is right for burning off in the summer. I wish there were some redeeming qualities, but there sadly isn’t. It’s a misguided affair that makes you scratch your head why it was even greenlit to series in the first place. The only good news is there won’t be a campaign to save, SAVE ME, because it would be surprising if the series even survives this summer burn-off before getting yanked off the schedule.

HATE IT? LOVE IT? LET US KNOW HOW YOU FEEL – COMMENT BELOW!