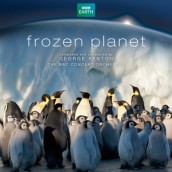 George Fenton continues to corner the market on scoring the Earth

Englishman George Fenton seems to have conquered the market on scoring every nook and cranny of the globe with a series of sweeping nature documentaries that have included EARTH, LIFE, PLANET EARTH and THE BLUE PLANET. And while the genre has technically evolved in light years from the dinosaur-age days of MUTUAL OF OMAHA’S WILD KINGDOM, the basic spectacle of watching animals being cute, or killing each other certainly hasn’t. That age-old struggle for survival is often mirrored in the artist’s challenge of going for the uncondescending beauty of God’s ice-covered earth, or choosing to play it with the family-friendly obviousness of an old-school Disney documentary.

Subsequently, Fenton’s score varies from the majestic to the wincing cutesies, complete with horn high-hats and plucky strings for those zany beats. Thankfully, there are plenty of evocative, no-nonsense depictions of the Arctic landscape to show that nature often lacks a sense of humor. While Fenton’s rousing orchestrations are most definitely designed for the widest possible listenership, the genuine wonder that Fenton conjures bests the cartoonishness of other material, whether it’s eerie synths versus pokey pianos, or monolithic icebergs of brass and strings. Still, there’s cleverness to some of the goofier stuff, particularly when it carries a jazzy loopiness for the animal antics. For if FROZEN PLANET‘s sweeping strings have enough brightness in them to melt the snow at hand, at the least this overall enjoyable, and sometimes entrancing album serves as the score to the kid-friendly fantasy epic that Fenton somehow hasn’t gotten the chance to tackle yet. THE GOLDEN COMPASS 2 anyone?

Clink on the link to buy FROZEN PLANET soundtrack