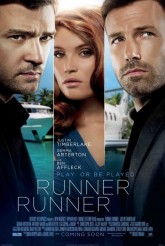 In real life and in movies, smart and talented young men are swept off their feet business-wise by older and more successful men. This tale is told often, but it seems to resonate more with filmmakers and actors than it does with audiences, mainly because there has to be something beyond just the familiar plot mechanics to make it resonate, and too often, the directors and writers confuse window dressing with deeper meaning. This is the case with RUNNER RUNNER, a variation on WALL STREET that substitutes the world of online gambling for the stock market.

Justin Timberlake stars as Richie Furst, a poor Princeton grad student who has been financing his education via his online poker winnings. When Richie ascertains that he’s lost because the poker-playing website is cheating him, instead of complaining on Internet chat boards, he heads to Costa Rica to confront the site’s owner, Ivan Block (Ben Affleck). At first, Ivan seems to blow Richie off, but then says he’s a) ignorant of the way some of his employees have tweaked the site to scam the players and b) impressed with how Richie figured out what the site was doing. He offers Richie a job, complete with lots of perks – including a shot at Ivan’s chief operating officer, gorgeous and classy Rebecca Shafran (Gemma Arterton). At first, Richie has everything he’s ever wanted, but then finds that his job entails some unexpected duties and is attracting some unwanted attention.

RUNNER RUNNER is flashy and sleek-looking, a la MIAMI VICE, though it’s not really about much of anything. It raises the notion of what happens when someone gets everything he thinks that he wants, but that’s not really the issue, because Richie winds up in deep trouble before he can even imagine getting bored. It’s also hard to take Richie’s disillusionment that seriously, not because Timberlake doesn’t sell it, but because anyone who’s bright enough to figure out the algorithms of a computer gambling business but dumb enough to suppose that the site’s owner is shocked, shocked to hear the site is crooked is one hard-to-buy character. The film hazily suggests Richie is subconsciously seeking to substitute a happier fantasy version of his relationship with his real father (John Heard), a loser gambling addict, but this angle is never made especially compelling, despite good work by Heard.

Affleck is fun as an offshore master of the universe and Arterton is suitably fetching, but the mechanics of the screenplay by Brian Koppelman & David Levien are never clever enough to impress us or get ahead of us.

RUNNER RUNNER looks great and has the virtue of moving quickly under Brian Furman’s direction, but it plays like a big-budget but otherwise average episode of a TV show about slightly shady people trying to bring down really shady people. Viewers won’t be bored, but they won’t be impressed either.