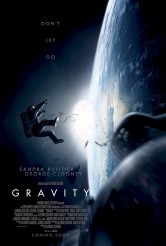 Director/writer Alfonso Cuaron proves two things with GRAVITY. The first is he is one of a tiny band of directors – James Cameron being the patron saint of the group – who is actually use 3D in a manner that is integral rather than a fancy afterthought. In the midst of a terrifying sequence, a piece of metal comes flying off the screen and we’re so immersed in what’s happening that we actually flinch away from the debris. The second is that he and fellow screenwriter Jonas Cuaron can create sweat-producing tension without a villain or monster in sight.

The premise of GRAVITY is simple. When the Earth-orbiting NASA shuttle is fatally damaged, two survivors, mission specialist Dr. Ryan Stone (Sandra Bullock) and mission commander Matt Kowalski (George Clooney), try to make their way to some kind of safety. Since they are in space, this seems well-nigh impossible.

There is a bit of set-up, with Stone and Kowalski doing routine work in their spacesuits on the shuttle’s surface. Kowalski banters with Mission Control (voiced by Ed Harris) and the captain (voiced by Amy Warren), while Stone is a bit more reserved. Then disaster strikes and we are on an inch-by-inch quest for survival.

There are no cutaways to what’s happening back on the ground or any other distractions. This kind of storytelling is very risky, because it’s easy to lose audience attention with one false move – any sense that something is repetitive or unimportant and we’d drift because we’d fear more of the same. Cuaron and his co-writer (and son) Jonas Cuaron, however, fill each moment with peril, dread, anticipation and the unknown, so that we feel as though we’re right there with the characters, holding our collective breath to conserve air. Again, this is one of those rare films when the 3D doesn’t just provide pretty pictures but actually adds to the experience, making us fear objects in the back of the frame as they advance to, and past, the foreground

Bullock delivers a beautifully calibrated performance, maintaining an underlying core of her familiar warmth but giving us a very tamped-down, controlled woman who wakes up to herself during the course of the film’s events. Clooney makes Kowalski the kind of solid, decent human being we’d all like to have on hand during a crisis. As for the choice of Ed Harris as the voice of Mission Control, after THE RIGHT STUFF and APOLLO 13, really, who else could it be?

By the time GRAVITY concludes at the end of its ninety minutes, we are exhausted. The filmmakers have convinced us that we are part of what we are witnessing, making for one of the most tense and intense movies imaginable.